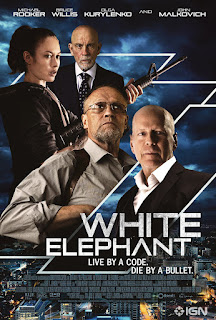 https://www.ign.com/articles/white-elephant-trailer-poster-bruce-willis-michael-rooker     Image and video (C) 2022 IGN all rights reserved, image not monetized, used for promotional purposes only Film is exclusively on AMC + in North America, all rights reserved

Greetings valued Dan's Movie Report readers, it is hard to believe that nearly 18 years ago in Vengeance Magazine, I reviewed Jesse V. Johnson's 'Pit Fighter', wow! What can I say, Jesse always strives for entertaining action films, yet with a dialogue rising far above the norm. Jesse always told me he strives to work with the best possible people in all genres of films, not just acting or behind the camera talent, but the type of people he works with is just as important. For Jesse, movies allow him to be creative, in 'White Elephant', Jesse is the director and worked as one of the writers along with Erik Martinez and additional dialogue by Katharine Lee McEwan At times when multiple writers are listed for a film, it can spell trouble, but in 'White Elephant' the story is enhanced by each writer working together as a cohesive, collaborative team. Jesse has once again leveled up!

I really do not like reviews that spoil plots, so I will get the basic plot culled from AMC+ website “A ruthless crime boss orders an ex-Marine turned mob enforcer to eliminate two witnesses. “

I will say that in one of his final roles, and his first released role since announcing retirement, Bruce Willis gives a solid performance, as the ruthless crime boss, he tries his best, given the circumstances. For me as a film fan, anytime he and John Malkovich are in films, they add an air of celluloid, well now digital, royalty.

'White Elephant' is an action crime drama, yes, but there is a copious amount of dialogue, which normally I do not like, but with Jesse's films in general, the dialogue is important to forwarding the story. Michael Rooker really shines here as Gabriel, a complex and conflicted character, I enjoyed the way he adjust to the variety of emotions that his Gabriel has to have during the film.

What more can be said about the fantastic Olga Kurylenko, usually relegated to antagonist characters in her films, Olga shines Vanessa, a detective with a military background and a tortured past. Olga is given much to work with in 'White Elephant', and I really look forward to her next outing with Jesse V. Johnson directing 'Boudica'. Ms Kurylenko is a really fantastic actress, check out 'The Water Divener' and 'The Room' to watch her in non action roles, very talented and nuanced.

One of the aspects I really liked about 'White Elephant' was that when the action happened it was memorable, rather than non-stop crazy action, the film had impact, allowing for a slow build for the first 30-40 minutes, yes there is an opening action sequence, but the action felt integrated into the story rather than driving the story.

Speaking of action, once again Jesse V. Johnson's stunt coordinator Luke LaFontaine wrangles a bunch of action sequences together, securing the set, allowing for excellent action and the utmost safety for the crew. Luke is a pro and is a wiz at hand to hand combat and weapons . In light of recent events, I cannot stress the importance of the armorer in a film such as 'White Elephant' there are so many guns and weapons used, I am sure that between Luke and armorer Taye Olsen the actors and stunt people were well versed on how to properly use and hold them. Director Jesse states that two other armorers were brought in for the MG42.

There is kind of a twist near the final 1/3 of the film, which is quite interesting, no spoilers! The final gun battle is rather epic, allowing a mixture of high tech and old fashion merged into one.

Dialogue in Jesse's films pays homage to the filmmakers he respects, ha in one scene an assassin can be seen putting on sunglasses and saying 'terminate this bitch' haha! Jesse, is never one to shy away from adding humor into what can be a serious toned film. He also showcases Olga Kurylenko in a dichotomous role, sometimes a bad ass, sometimes vulnerable. By allowing her character to be vulnerable, 'White Elephant' adds a sympathetic human element. Honestly I thought she was going to be this gung ho, bad ass detective all the way through, yet, she is not!

Minor gripe is that Olga's detective partner who witnesses the initial crime, (minor spoiler) is easily killed, That said, much of the department was a bit crooked, but the veteran probably would have taken some precaution. Sadly she had to have this motivation, as she figures out quickly that she is next. An extra 10 minutes added to the 92 minute film might have allowed for a fleshing out of his character.

Everything else is polished, musical scoring builds tension, yet is never obtrusive. I loved the fact that the entire film was well lit and action was easy to see, even at night, some far away shots were used which I am sure were for the stunt doubles, yet never did I feel I was not a part of the action. Action star and martial artist Lee Charles had the opportunity to work very closely with Olga for 'The Courier',thus allowing her to learn detailed hand to hand and action movements. 'White Elephant' gives Olga a chance to use some of those skills, yet expounds upon this by adding a variety of weaponry. Speaking of weaponry, a mix of old and new, added for an entertaining final sequence!

Overall, 'White Elephant' rates a very strong 8.5 out of 10, a strong showing for AMC+, according to various websites the listed budget is 15 million, regardless, this is obviously Jesse V. Johnson's biggest film to date, and as always I am excited to see what is next. According to Screen Daily 'https://www.screendaily.com/news/olga-kurylenko-to-play-legendary-warrior-queen-in-boudica-bleiberg/dimbort-to-launch-cannes-sales-exclusive/5170564.article Jesse V. Johnson and Olga will team up again for another epic movie, sword and sandals style!

Head on over to IGN for the exclusive trailer and poster!  https://www.ign.com/articles/white-elephant-trailer-poster-bruce-willis-michael-rooker

Posted by Dan's Movie Report-Danny Templegod at 6:16:00 PM No comments: