The Legends Of Nethiah Movie Review 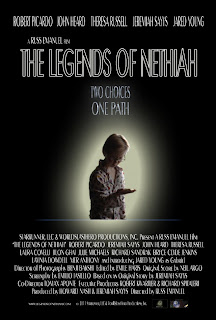 Above Pic: The Legends of Nethiah poster


As an independent writer and reviewer I have the opportunity to watch a wide variety of films from all genres. I will be quite honest, I usually don't review children's oriented films, but having been familiar with director Russ Emanual's earlier work, I was interested in his latest offering The Legends of Nethiah.

The films starts off a bit slow as we are introduced to the little boy Gabriel (Jared Young), he is shown with bruised knuckles from a fight. He breaks a kid's nose at school and is suspended. His parents are fighting constantly and are on the verge of getting a divorce. The want him to choose who he is going to live with. While at home he is cared for by his grandfather (Robert Picardo).

Rather than pressure the boy to tell him what is wrong his grandfather proceeds to tell him an allegorical filled story of a boy named Nethiah. Nethiah had to endure many hardships throughout his life, as his people are enslaved by an evil king.

The movie has a message, and the acting is pretty good especially by Jared Young. The story has a large amount of dialogue, at times I wished the action would be a bit more plentiful. The film deals with several issues that children have to encounter: divorce, fighting, friends your parents don't approve of, and tough decisions.

At just over 92 minutes, The Legends of Nethiah is not long, but the wordy dialogue scenes often detract from the message and the action in the film. The fantasy subplot, is only shown for brief moments at a time, and unlike The Neverending Story doesn't generate the epic feel of being on another planet, possibly due to the limited budget.

All of that said, the movie is decent, but I think needs a bit more excitement to hold a child's interest if not watched with an adult present. I do recommend it for parents to watch with their children. I rate The Legends of Nethiah a 5.5 out of 10
Posted by Dan's Movie Report-Danny Templegod at 6:03:00 PM No comments: