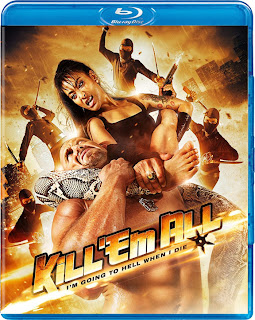 Above Pic: Blu-Ray Cover for Kill 'em All

Before beginning this review, I will warn all potential viewers, this is an martial arts action film, ALL the way through, there is very little set up backstory etc... That fact aside Kill 'em All thanks to the mind blowing fight choreographer Tim Man, who also stars in the film as "The Kid"

The film opens with all eight combatants being drugged, kidnapped, and taken into a Saw style torture chamber known as The Killing Chamber. These 8 were hand selected by Scorpion as they are the top killers in the world. One will survive.

The contestants are initially given metal balls with numbers, the lowest two numbers are to fight first. The fights are to the death, though in some cases, the strikes did not appear to be deadly. The winner of the first match was allowed into a special weapons chamber to choose one weapon. Non compliance by the contestants was cause for knockout gas to be released. 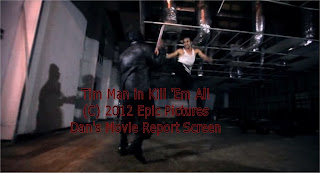 Tim Man gives the thug the Phil Collins treatment, "I can feel it coming in the air tonight!" woohoo! Yeah I went there! (C) 2012 Epic Pictures Dan's Movie Report Screen


With minimal set up, sparse set dressing, the fights take center stage. More often than not, true action flicks seem to get lost in background accoutrements. I wanted to like The Man With The Iron Fists, but sadly, could not, had flash but no grit. Kill 'em All was no flash all grit. The fights were amazing, long and for the most part well planned out. The camera knew were to be and Tim Man and Ammara Siripong were on point with the action.

This is a film only for action purists, non-Hollywood polish. There is very little dialogue, as the fighting takes center stage. My only small complaint is that some final fight finishing moves were a bit on the calm side compared to the actual fight. That fact aside, it is obvious, that the fight choreography was well planned out, and that the actors themselves had some input to accentuate their individual fighting style. 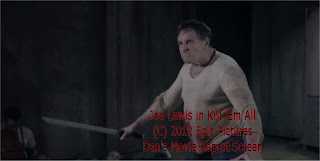 Above Pic: Joe Lewis gets his sword on, while bodies lie piled in the back in Kill 'em All (C) 2012 Epic Pictures Dan's movie Report Screen.


Discussing the acting, sadly, Kill 'em All is Joe Lewis's final film, but he goes out with a bang as his character The Carpenter is snarly and aggressive. By the end of Kill Em All, the few characters that are left have some depth as more story is added. Yeah, I am sure with more cash, everything would have a more polished look, and maybe more exotic local.  I am waiting for Tim Man to do fight choreography work on the new Scott Adkins film, Ninja 2.

Gordon Liu plays the bad guy Snakehead with a maniacal calm, the final fight he has is very long and a well worthy Christmas treat, haha. His calm demeanor work well as a silent, enemy. 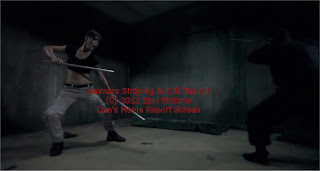 Above Pic: Ammara prepares a solid steel explanation of her anger, and does so in a belly shirt, ok ok, yeah so what. (C) 2012 Epic Pictures Dan's Movie Report Screen


Although it has been years since Chocolate, Ammara Siripong has a second breakout role in Kill 'em All. The film showcases her talent as an action actress and her willingness to work hard to sell the fighting is impressive. Ammara has to mix it up with the boys, and she has no problem, being the most dangerous one in the room haha. She has vivacity, and enough mystery in her character to keep the audience guessing as to her full potential. Hopefully directors will watch Kill Em All and allow Ammara to work in more feature films.

Director Raimund Huber keeps the action flowing in Kill 'Em All as the body count piles up. I rate Kill 'em All a Metallica, (title of their first LP) worthy blast of insanity, an 8 out of 10. Bring on the negative anonymous comments, go on,  I dare you hahahaha Happy Holidays.

For more info on Gordon Liu go to his Facebook Fan page, has a huge collection of info @ https://www.facebook.com/GordonLiuFanPage

Clash Of The Empires Movie Review 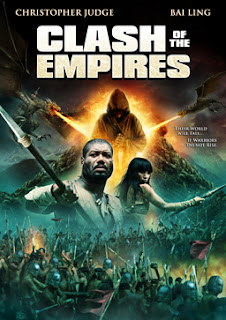 Above Pic: Poster for Clash of The Empires


Someone asked me, why do you watch so many low budget films. My response was, because I am always interested on what film writers, directors, and actors can come up with on a limited scale. Mock The Asylum all you want, but as a production company, their business model is actually quite sound. With a principal photography shooting time of only a couple of weeks and barely a year turnaround from concept to DVD release, they have churned out a lot of product without much cost. The latest blast of insanity from The Asylum is Clash Of The Empires, originally titled Age Of The Hobbits, which the film is nothing like The Hobbit, and I am not even sure why they named it.

Let me cut to the chase on this one, I must say, I am really disappointed in Clash Of The Empires. The tribal people in the film are supposed to be hobbit like, and many of the dubbed voices, of children supposed to be adults and woefully bad CGI make this film very hard to watch. 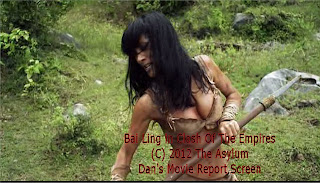 Above Pic: Sweet Bai Ling in skimpy threads, complete with a spear and a scowl. (C) 2012 The Asylum

There are lizards, spiders, and various sundry atrocities as the group wanders through the tropical wilderness looking for the lair of the evil one, but the movie has no flow. The action has no impact, and the characters are so shallow. The main reason I watched Clash Of The Empires is for Bai Ling. Even though she is one of the main characters, dressed in cave woman attire, Bai's charater a female warrior/explorer is so poorly written that her impact on the film is severely dimished.

The Asylum has put out a few good titles over the past couple of years, Clash Of The Empires, is unfortunately one to avoid, and rates a 3 out of 10.

Movie Production Report: In The Blood filming in Puerto Rico 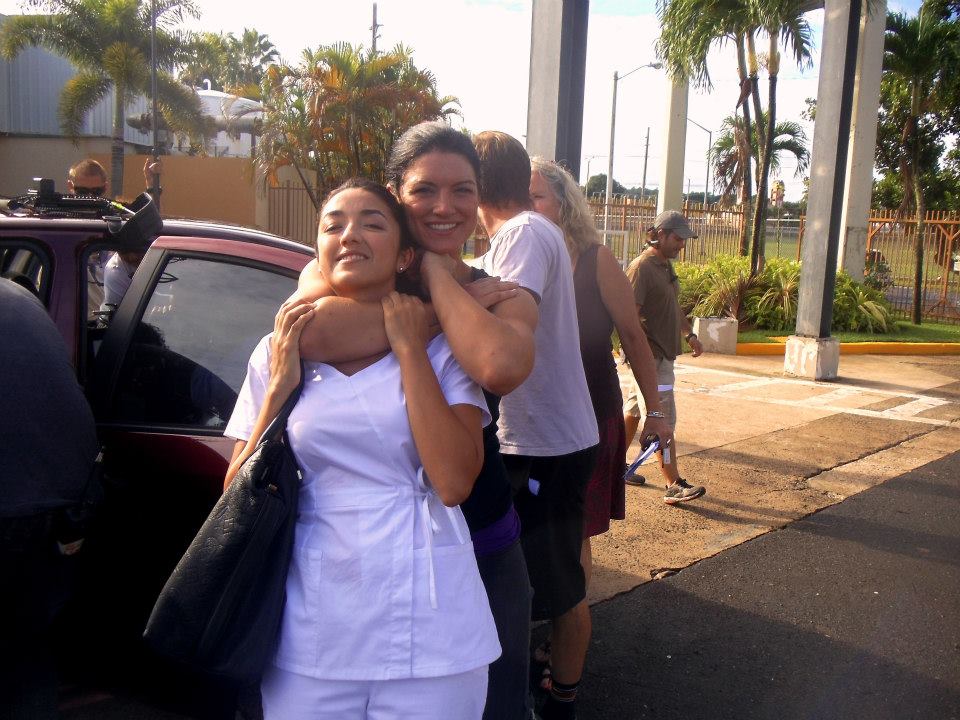 Above Pic: Gina playfully choking Yvette Yates on the set of In The Blood in Puerto Rico. Pic Credit:  Yvette Yates Facebook Page.


Actress Yvette Yates reports is that she is currently working on a new action film called In The Blood her character is Leta. The film also stars MMA star Gina Carano and veteran actor Danny Trejo.

For more info on Yvette go to her official facebook page @ https://www.facebook.com/YvetteYatesOfficial