Greetings valued Dan's Movie Report and Action-Flix.com readers! The Winners have been posted for the amazing IDTV Action Fest in Austin, Texas!

Congrats to all the nominees and of course the winners!

This is a great indie festival run by real martial artists! For further information about the festival and how to submit for the 2020 festival please check out their official sites!

Of important note, this festival had the first U.S. theatrical screening of the film Hollow Point: First reviewed in the USA on Dan's Movie Report! You can legally buy the film as a UK import on Amazon! I have posted my no spoiler review @ https://dansmoviereport.blogspot.com/2019/07/hollow-point-2019-movie-review-c-2019.html

I urge all of my readers to purchase legal copies of films to support the indie movie industry! The film is on Amazon legally as a Region 2 DVD! Just make sure you have a region free DVD player.
Buy Hollow Point!

Check out actress Natalie Burn, as filmed by director Daniel Zirilli, live on the set of Hollow Point!


Also special thanks to Daniel Zirilli for filming my friend Carmen Cabana while she was hard at work as the Director of Photography on Hollow Point!

John over @ Action-Flix.com has reviewed Chad Law, one of the writers along with Evan Law, and Daniel Zirilli on Hollow Point~

I had the opportunity last year to interview real life cop and one of the stars of Hollow Point Bryan Bryne! http://dansmoviereport.blogspot.com/2018/08/actor-bryan-byrne-interview-c-2018-dans.html

Posted by Dan's Movie Report-Danny Templegod at 12:16:00 PM No comments: 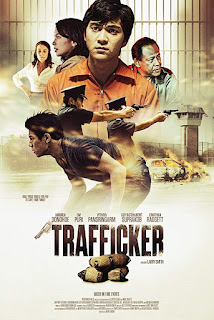 Above IMDB poster of Trafficker

(A point of clarification, the movie was filmed in 2015, yet is just now released on Amazon in August 2019. IMDB reports when the movie was produced if the film making team reports production, there are a few movies with the Trafficker name. )

Greetings valued Dan's Movie Report readers, back in 2015 actress Krystal Vee notified me she was working on a human trafficking film. I connected with the film makers but had only seen a few updates. Lo and behold, in 2019 the film making crew got in touch with me and said, the film is available on Amazon Prime, as part of the service! Sometimes films go through various screenings and changes, but Amazon Prime is a great opportunity for indie filmmakers to reach a much larger audience.

In the beginning, following a future look in, we see the young boys witness the murder of their mother on a refugee boat that is ambushed. This is a very harrowing scene, that sets up the rest of the story
They are rescued and then attends boys school where two boys are being bullied by some of the bad element. Various pranks are played, pretty horrible stuff, all the while on the quiet to the religious headmasters. Eventually the boys take matters into their own hands and leave the school, this is not a spoiler really but more where the adventure begins.

The set up really provides a jump off point for Trafficker. Rather than show the flash and erudite areas. Focusing more on drama than action the two brothers end up mixed up in the mob, and begin the path down the end of the road. Things are not what they seem, but following the opening set up, Trafficker flows in a more linear timeline.

Eventually the brother on the 'bad side' meet up with Ling, played by Krystal Vee, thus the dichotomy of attempting to live a normal life, yet it is not meant to be. So many twists and turns, this is the value of this poignant film. What people will do to secure their freedom, and of course financial independence.

The acting is not bad, but lacks a bit of urgency for such a serious subject. I liken this to the possibility of some inexperience, that said it is consistent, and no one actor brings down any element of the story.
Honestly I wanted to see more crying and visibly upset people given the nature of the latter half of the film. The story is great, as is the message. The two leads and Krystal Vee are the best of the lot, and try to portray the anguish. Also very nice guest spot by Amanda Donahoe as the influential socialite lawyer. Look for action guys Charlie Ruedpokanon, and Eoin O'Brien small roles as well.

The technical elements are their in Trafficker, music, scenery, camerawork are all solid especially for an independent film. My only gripe is the lighting on the night scenes and some of the adr was a bit quiet Overall for a film on an extremely tight budget it is pretty damn good.

I am not going to spoil what happens, but this film will sure leave you thinking about what could have been in the brothers' lives. Questions remained in my mind, which is what I am sure which is what director Larry Smith and Writer Ken Kwek, who wrote the story and Larry Smith the creator of the screenplay wanted.

Very solid effort, the ending of Trafficker resonates and the path leading up to takes the viewer down a long road, full of bumps, a must watch 8 out of 10. https://www.facebook.com/traffickerthemovie/

Finally, for a blast from the past, please check out my earlier interview with Actress Krystal Vee:  http://dansmoviereport.blogspot.com/2012/01/krystal-vee-interview-c-2012-dans-movie.html
She is working on a new project now, if all goes well a new interview at the end of 2019!

Posted by Dan's Movie Report-Danny Templegod at 11:09:00 AM No comments: