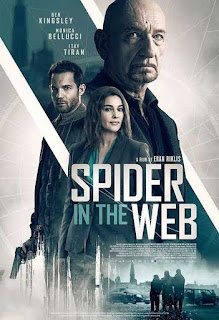 above: Poster for 'Spider In The Web' from IMDB

Greetings valued Dan's Movie Report and Action-Flix.com readers. Back in August of 2019 a new film called 'Spider In The Web' was released. This under the radar yarn starring Ben Kingsley and Monica Bellucci is a slow build, with some intriguing twists.

Ben Kingsley plays an aging Israeli agent searching for proof that someone is secretly supplying Syria with chemical and biological weapons, He has to supply 'the smoking gun' actual photos and document related, not just hearsay evidence. Actually he is fighting on two fronts, one to clear his name from past transgressions. 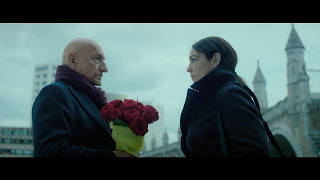 
Actress Monica Bellucci plays Dr. Angela Caroni, a rather mysterious figure who Kingsley character Adereth needs to get information regarding the proof. She is seemingly sympathetic to the environmental causes, and early on is brought into the fray on somewhat of a ruse, yet she seems a willing participant.

Young agent Daniel played by Itay Tiran is involved helping out Adereth, with the connection being his father and Adereth were friends prior to his death. Essentially the Daniel character serves as an attache, and protector, all the while trying to keep his hands and head clean.

All of the characters in 'Spider In The Web' are rather shadowy figures, outside the three, they are never fully developed, nor explained. Everyone is being monitored, either by wiretap of hidden camera. Dr Caroni's house is bugged in every room! The audience is made to feel like they are part of the story listening in and viewing in places they should not be. Kind of entertaining, a bit voyeuristic, a bit slow moving though, which leads me to my main gripe. The movie is interesting, full of plot twists, yet the movement between scenes and action is just so minimal, I found myself checking the time elapsed. Even with this fact, the sheer detailed dialogue needs to be followed to understand the complex story.

Monica and Ben Kingsley are seasoned pro actors and really have a chance to interact. Perhaps this personal interaction and the dynamic twists near the end make the film really satisfying to watch, trust me, unless someone told you, the ending is rather different, especially by Hollywood standards.

All of the technical stuff in the film is good, lighting, mood music, sets. Overall this is a decent film, all be it a tad slow, 'Spider In The Web' rates a 7 out of 10. The film is actually available now on VUDU to watch. https://www.vudu.com/