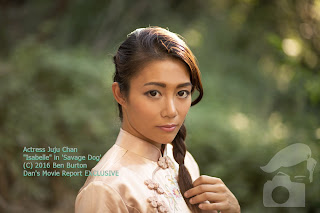 Greetings valued readers, thank you for supporting Dan's Movie Report for the past seven years! Fresh from wrapping production on Jesse V. Johnson's new feature 'Savage Dog' action actress Juju Chan shares some behind the scenes thoughts on her involvement with the various cast members. This is of course a preliminary discussion, closer to the time of the film's release date, a more in depth chat will occur. Time to win the fight with Juju, and peer behind the action, with another exclusive Dan's Movie Report interview.


(For my in depth, and informational Juju interview, please follow this link: http://dansmoviereport.blogspot.com/2014/08/actress-juju-chan-interview-exclusive-c.html) 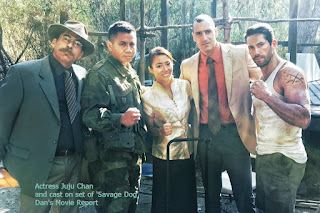 DMR: Please tell me about your training prior to the commencing of filming 'Savage Dog'?


JC: Besides being an actress, I am also an athlete and coach, therefore, I have been training Taekwondo, Thai boxing, nunchucks, tricking, and fitness every day before the film to maintain my skills and figure.


DMR: Chat about the first time you met 'Savage Dog' director Jesse V. Johnson, and what made you decide to ultimately work on the film?


JC: I met Jesse this March in LA introduced by you, Danny! Jesse is a very friendly, honest, and a talented filmmaker. We were chatting about films and martial arts/stunts at our first meeting, it was fun! He also told me he would like to send me the script of 'Savage Dog' and think I would be great to play the role of Isabelle. After the meeting, I went home and watched two of Jesse's previous films 'The Butcher', and 'Charlie Valentine', and love his work. Jesse sent me his script, and it's fantastic! With great character building and high intensity, the story of 'Savage Dog' is gripping!


When I read it for the first time, I immediately liked the Isabelle character. I certainly understand her optimistic view of people, even in the face of the evil things that she must have witnessed while growing up. That's why after I've read Jesse's script I accepted the role right away. 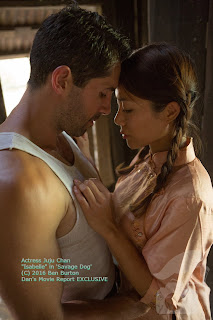 DMR: Cool story, yes Jesse is super talented, very happy to have made the connection. Shifting gears to the actors in 'Savage Dog', discuss working with legendary action star Scott Adkins, can you shed some light on what he is like off camera, a story perhaps?

JC: Scott is a great martial artist as well as actor. Working with Scott is fun and wonderful! It is very easy to get into character and emotion with him when we are doing our dramatic scenes. I've seen Scott's work, love his presence and action in the Undisputed movies. I am looking forward to 'Boyka: Undisputed' to come out soon! I very much admire his great agility and his dedications in action and physical training. Because I am also a martial artist and trained in Taekwondo and Mauy Thai, I had been paying attention on to his kicks, and I am impressed! 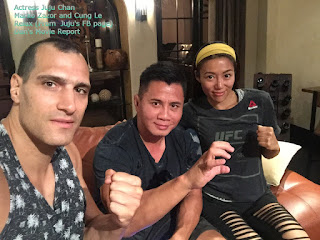 DMR: Chat about working with Cung Le, saw you guys out and about, talk about meeting with and working with him? He is very cool, he was at a Strike Force Event here in Florida, cool guy. Saw that you guys had a dinner, must have been nice to catch up?

JC: I've actually met Cung back in 2014 in Macau during one of the UFC fight events. It was great to see him again and to actually work together on an action film! Cung is like my big kung-fu brother, it's always fun hanging out out, training and working with him! Cung has a great presence on films! He is a great fighter both physically and mentally, and I've learned a lot just by hanging out and working with him. Looking forward to collaborate with him in more projects in the future! 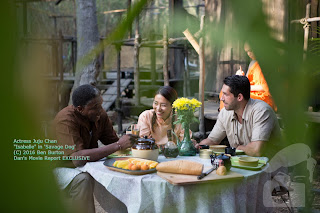 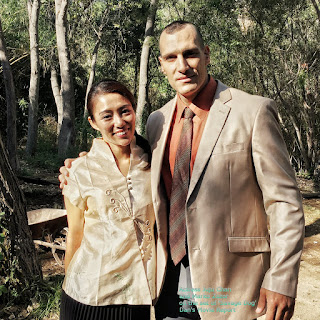 DMR: Marko Zazor is a real up and coming force in Action, chat about how he is professionally, seems like an amazing talent, love his energy. I noticed you saw Sultan in the theater, I did as well. I do hope that more action movies are shot in Bollywood, curious as to your reaction?


JC: Marko is a great martial artist and talented action filmmaker! Love his energy and dedication in martial arts and action films!!! He is also an amazing cook! He invited us to a home cooked dinner where he made the best ribs, and vegan pizza!!! I went to saw Sultan in the theater with Marko, and it was my first Bollywood feature that I have seen in the cinema, and I LOVE it!!!! It is 3 hours long, but didn't actually feel that long, because the story is so well written and the intensity and excitement keep building up throughout the film! Marko has an awesome, powerful fight in the 'Sultan'!!! Love all his kicks and tricks! So powerful and amazing! After watching this film, I am very interested in working on an action Bollywood film!!! Where I can combine singing, dancing, acting, and martial arts in a film project!!! 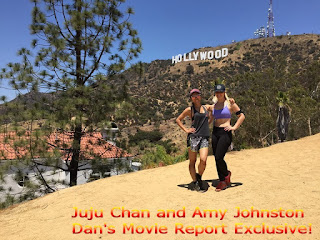 DMR: What are some of the things you have done in your down time in the U.S while filming? Of course the epic hike with Amy, perhaps chat about that?


JC: I love martial arts, sports and fitness. When I have spare time, (even if I don't I will try to make some) to go hiking, training on the spring floor at JAM (Joining all Movement), taking pole dance classes, eat and watch movies.
L.A. is a great place for hiking!!! I think I have almost hiked every mountain in L.A. I usually go to Runyon Canyon, Griffith Park, Burbank, Malibu Creek Canyon, Santa Monica Steps. It is at times a bit difficult to find a companion to go do off trail crazy hikes with me, but luckily, I have a good friend Amy Johnston who will go do these crazy hikes and activities with me. It's fun and a great way to stay fit!!! 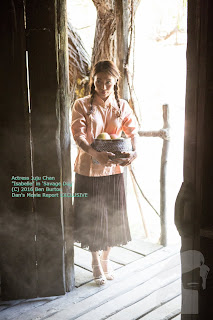 
DMR: Yes, Amy is a perfect friend for you, I am ready to see the next Amy-Juju adventure, hopefully in a film soon! Shifting gears, discuss some of the differences in general in a U.S. production compared to a H.K. production. What are some things you feel that the producer side of you would alter?


JC: In general, there is a lot more time spent on pre-production in U.S. films than on Hong Kong productions. This really is just generalizing, as I have been on well planned Hong Kong films, and on U.S. films where cast and crew have no idea what's happening. Certainly, I hope to be able to allow as much planning ahead of time as possible, although I understand that isn't always possible with sudden financing adjustments, script changes, losing key people, and so on. 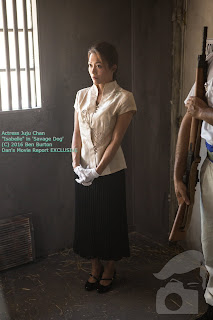 DMR: I look forward to your producing work, your organizational skills are impressive. Juju, Please discuss your long term goals for the U.S. film market, acting and producing wise?


JC: My long term goal has always been to get involved with producing. That is not to say that I put any less emphases in acting, and I love it, and hope to constantly improve my ability in it. I'm very aware of the loss of control, however, one experiences when others are producing a film that you're involved with, and I do find that frustrating. I dearly want to bring in all the wonderful people who I've had the privilege to work with in the past, to collaborate on a good project. That is my hope. 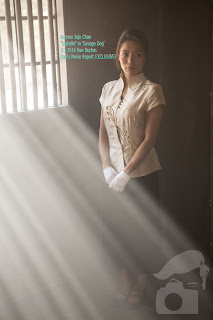 
DMR: Thank you Juju for taking time out of your busy schedule to work on this interview. For up to date information on Juju's latest activities, please like her official Facebook page @ https://www.facebook.com/jujuchan/?fref=ts


http://dansmoviereport.blogspot.com/2016/07/amy-johnston-suicide-squad-contest-plus.html Please like the official Dan's Movie Report Facebook page and leave your information in a message to enter. https://www.facebook.com/DansMovieReport/?fref=ts


Posted by Dan's Movie Report-Danny Templegod at 8:57:00 PM No comments: