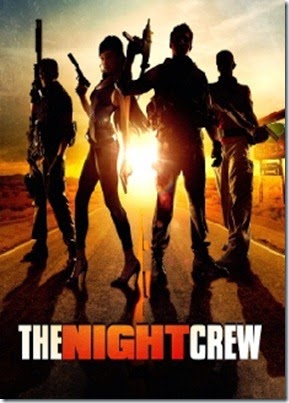 Above photo: Promo Shot of The Night Crew


I have to admit, I am a sucker for crazy vampire type films. Writers Christian Sesma, Paul Sloan
serve up 'The Night Crew' , a twister tail of chase and revenge! I will keep this review short and sweet.

What we have here is a film in the style of 'Dusk Till Dawn' about a group of bounty hunters contracted to pick up and return a bail jumper. Things are not what they seem, as this particular bail jumper, in addition to being very adorable, is ruthless, violent, crazy, and has superhuman strength!

'The Night Crew' is chalk full of violence, in a check your brain at the door way, and suspending the belief that a 100 pound woman can overpower not only one huge armed guy, but many.  Actually the lead actress
Chasty Ballesteros as Mae is very enjoyable to watch, she had to do a bunch of action and also play scared and coy, and not only manages to pull it off, she brought some real passion to the role. Her character is central to the story and she is the reluctant hero, and scared girl at the same time. Somewhat of a dual role, but seems like the story is an amalgamation of two stories merged into one, I wish they explored more of her original life with Danny Trejo's character, might have made for a slightly more balanced film.

Danny Trejo, plays a lead bad guy, a sadistic killer hell bent on finding his young protégé
Also in film are Jason Mewes and Bokeem Woodbine. The film is rather straight forward but has a odd ending which I will not spoil. Plenty of gunplay, obviously a R rating.

Overall the movie is enjoyable, not amazing, but def worth a rent,  'The Night Crew' rates a 6 out of 10.
Posted by Dan's Movie Report-Danny Templegod at 12:56:00 AM No comments: