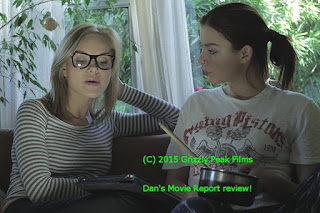 
Greetings Dan's Movie Report  readers, a break from the action films and a swerve to the left of center with this smart and quirky comedy called Seeking Dolly Parton. The film is really good, and centers on two ladies who happen to be lesbian, and one happens to want to have a baby. A chance meeting turns to friendship, love and commitment.

Back in 2010 the fantastic Italian film 'Room In Rome' centered on a chance meeting, two ships passing in the night, an irreverent and sexy look at the one night stand, salacious and daring. 'Seeking Dolly Parton' is the opposite, two ships passing, but eventually coming together for a long term commitment, without the sordid sexual overtones.

The film's performances are undulating and intrinsically powerful. Kacey Barnfield as Charlie and Anya Monzikova as Cerina give amazing and academy caliber character life to 'Seeking Dolly Parton' from their meeting on the Subway train platform right till the end.

This is a dialogue laden film, but never gets bogged down due to the masterful story and direction from Michael Worth. Michael Worth comes from an action related background, but blasts into drama very successfully with such erudite films as 'God's Ears'. Worth has a way of maximizing the abilities of who ever he works with ranging from legendary action actress Michiko Nichiwaki to the Kacy and Anya.

This is a solid, and technically well produced comedy/drama. Tinging on humor, never overt, never over the top. Even though this is technically a lesbian drama, I feel a wider audience will enjoy the film as the subject matter crosses, gender boundaries.  The ladies are not only beautiful to gaze at, they have the accouterments of far more experienced actors, and I predict great things in the future for both Kacey and Anya.

Overall 'Seeking Dolly Parton' rates an 8.5 out of 10, worthy of a purchase and support in initial screenings. Go see it!

This is a very preliminary review so no spoilers. The film is screening in Chicago September 22 Go to http://reelingfilmfestival.org/2015/films/seeking-dolly-parton/

Update: Stream in Vimeo for a limited time for $3.99 https://vimeo.com/ondemand/seekingdollyparton