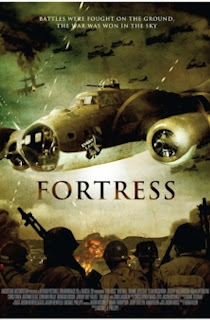 It has been a long while since I have witnessed a decent World War II film. Fortress follows a story based on true events of a squadron of B-17 bombers making strafing runs in Italy from Northern Africa.

Fortress opens with a fantastic air assault including several formations of planes making the bombing run, while axis forces, make machine gun passes across the formation in small planes. The focal plane is called the Lucky Lass and is hit with small arms fire, loses an engine and a couple of guys die inside, but the plane is landed safely.

For a low budget film I thought the aerial combat and filming were fantastic. I liked the sets, and it is obvious that some time was taken on the outfits, and items used during this time period. The attempt at the softer moments seemed a bit forced, but this was about the action. The story development, and humor was a decent try to establish the characters, but leaves one yearning for the flight sequences. The middle of the film drags a bit. There is some tension between the mechanics and airmen which is the highlight of the downtime between flying.

The final 15 minutes is a full on assault on the senses, a tense melodramatic ballet of bullets and bombs in mid-air. The action is tight and tense, and includes spinning and diving action. The inter-splicing of wide shots and close-ups added to the action by placing the viewer into all angles and stages of the combat.

The acting was consistent, no one person stealing the film, but no one detracting from it. Director Mike Phillips and writer Adam Klein obviously took their time to create this and I hope to see more of their work in the near future.

This film works on many levels, and shows how a lower budget production can be as good quality as a big budget theatrically released film. I rate this film a definite rent and a buy if you like war films. Fortress rates a 6.5 out of 10.
Posted by Dan's Movie Report-Danny Templegod at 1:46:00 PM