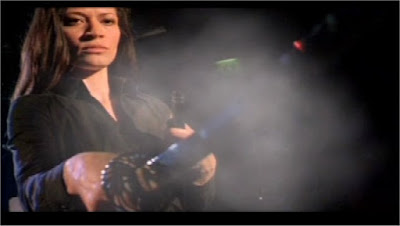 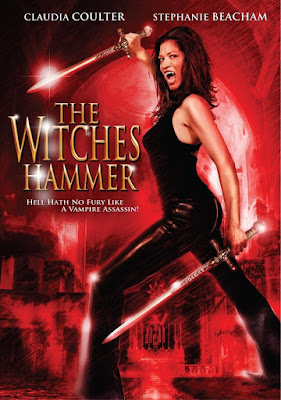 With the popularity of the Blade movies, I am surprised there hasn't been a serious attempt at having a female vampire for hire, to kill the bad guys. Back in 2006 Shira: The Vampire Samurai attempted this, but that film was more of a tongue and cheek affair, with cheesy effects, an a rather unimposing female lead.

The Witches Hammer opens with the lead character being bitten, and going into a lab to be fixed up and trained, La Femme Nikita style. She is a vampire, with a purpose, and a mission.She is trained in fighting, weapons, and various firearms. I wish the fight scenes were longer, without the quick edits, although for an ultra low budget movie, they were average.

The highlight of this film was the lead actress Claudia Coulter who plays Rebecca, a vampire turned against her will. She has a very cool accent, a forceful demeanor, fighting, and acting ability. She kind of reminds me a bit of Yancy Butler, sexy and rough. I hope to see more of her, she could easily do Witchblade if it was ever made into a movie, or any other action flick. Hopefully a director can rescue her from the low budget realm so more people can enjoy her performances.

The plot is rather muddled when she meets up with a group of witches and she is sent on a mission to kill a vampire named Charlotte. The story gets a bit too lighthearted, but at least they explain in detail who Charlotte is. This movie really suffers from from inconsistent writing, and a very low budget but I enjoyed some of the ideas, and envision them materializing on a larger scale.

If you bleed for vampire flicks, I would say rent this especially for Claudia's inspired performance. If you don't enjoy sexy girls with fangs, well you have been warned. I rate The Witches Hammer a 5 out of 10.