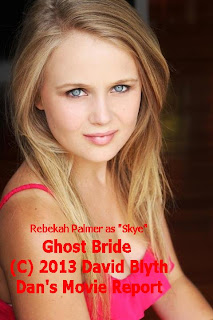 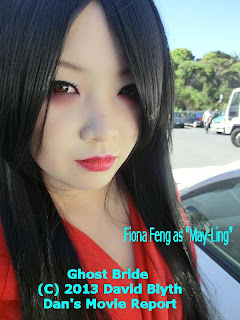 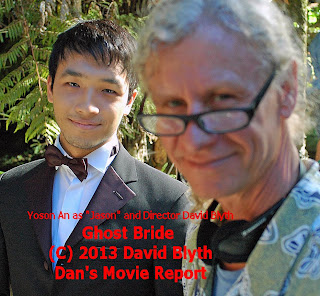 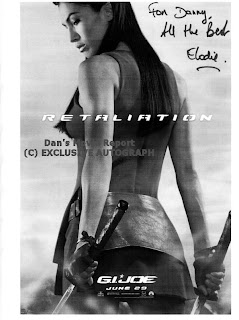 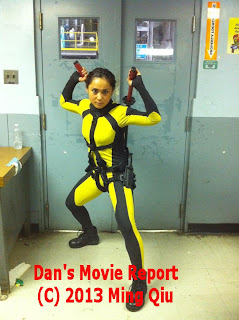 Posted by Dan's Movie Report-Danny Templegod at 1:23:00 AM No comments: 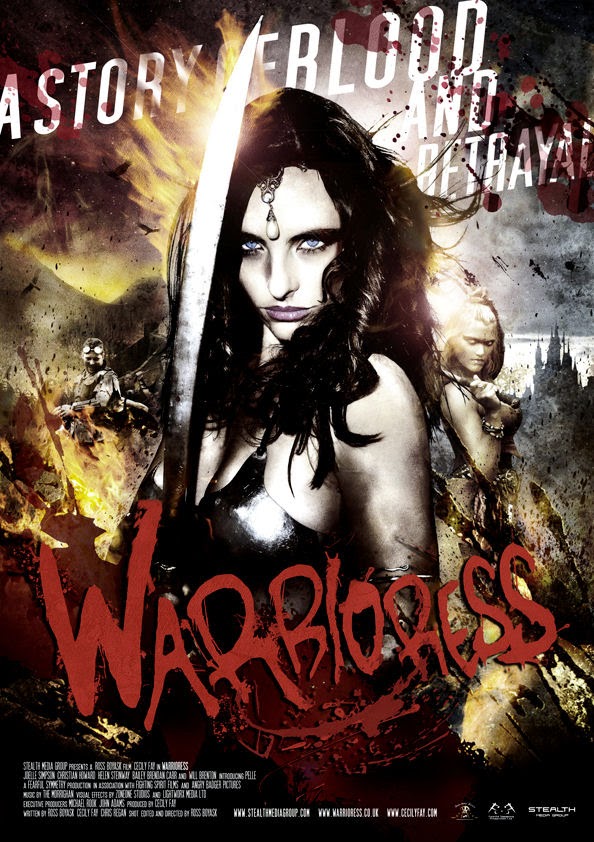 Above Pic DVD cover for Warrioress!

Update: 4-3-13: Ross Boyask reports: "U.S. screening announcement for Warrioress:  Warrioress is officially screening in the Action On Film film festival in California, August 16th-25th! Many thanks to all our amazing cast, crew, friends and supporters." For more on AOF check out www.aoffest.com


After a long wait, Warrioress is in my grasp! A cold wind from the U.K. blows my way! Ok, Ok, I hear my readers are like, man you promised to review this a year ago, what is the delay? Be patient, things take time, and thus T's have to be crossed, I's have to be dotted and Q's have to be squiggly lined! As promised Dan's Movie Report in 2013 will continue to feature self financed films, spotlighting indie film makers! Watch for Warrioress Director Ross Boyask interview later in 2013!

Warrioress opens with a our sexy heroine Cecily Fay, as Boudiccu, calmly showering in a waterfall, yeah there is some nudity, so for all those asking, the film has some. Just like in the film  In My Skin the person naked, produced and wrote the movie, so no casting couch, unless that particular couch is full of swords haha!

Soon trouble is a brewing whoa, a lady is in distress in the forest, and in a flash, Boudiccu slips into a small revealing dress and dispatches her unworthy adversaries. Cecily is an accomplished Silat practitioner, her moves in Warrioress, are fluid and effortless as she dances from scene to scene in a blood soaked ballet. Although some of the villains are background fodder, they are not the focus of Warrioress.

The quest to fulfill and ancient, yet incomplete prophecy is revealed that a warrior must be chosen through combat every generation. For the quest Boudiccu is given two magical swords, The Opener and The Dragon Singer. All the while an ancient spirit the Morrighan http://en.wikipedia.org/wiki/The_Morr%C3%ADgan speaks in riddles to confound Boudiccu, thus forcing her to meet her fate, without much of a clue! Yeah I got a bit lost here, but the flowery dialogue and ominous foreboding is enough to set the mood.

The Leader of The Falonex assassins: Djahn hides before the fight!


Of course there is fierce, and sexy resistance. The seething energy offered up by the female fighting force of Falonex Assassins is my favorite scene in the film. The Falonex,  Ruled by and aggressive and sultry Djahn portrayed with zeal and fervor by excellent stunt-woman Helen Steinway Bailey her fights are detailed and expertly choreographed. Yeah, watch for more on her soon!


Not to be outdone, Martial Artist, Actress, and purveyor of all around mayhem with piercing stares;  Falonex Assassin Zara Phythian has an epic dual with Cecily. While most women sit around and argue the merits of Cosmopolitan, and how to prepare fondue, refreshingly, these two ladies gladly use whip-chains, swords, and Bo Staffs are used to discuss matters!

An unlikely alliance is a prelude to an uncertain future!

In fact virtually every weapon is displayed throughout the copious fighting in Warrioress, and I mean everything. Boudiccu is joined on her quest by a second warrior named White Arrow (Joelle Simpson) as in the prophecy one from each village. The two are forced to form an alliance as based on the prophecy, but to what end? White Arrow's skill lie in cunning,thievery, and deadly arrow accuracy. She makes men and women quiver with her quiver! She is a hard drinking, crass ruffian, this the ironic exact opposite of white! HAHA! The dichotomy of the two characters works, as they go on their quest, with Boudiccu wanting to go in hard and White Arrow, picking her battles. Simpson's voice is booming and authoritative, and works well for her character

Warrioress has humor, but not over the top, just enough to keep you smiling. As Boudiccu declares "A different Death For Each of them!" in one scene littered with and enough adversaries to attack a village!

Ahhhh... back to the quest, No! Not gonna spoil it! Damn you reviewer tell us more! There is fighting, an even greater enemy, prisoners, a variety of outfit changes haha etc... An official Production blog is set @ http://warrioressthemovie.blogspot.com/   Check that site for an detailed character list if you want more!

On the periphery, the movie is well framed camera wise, utilizing the forest, shoreline, etc even on this limited budget is rather cool. The fight scenes seem to be choreographed based on ability of those involved, as some fights are amazing, others are just a one and done thing. Overall quite amazing!

Warrioress has the feel of Dragon Crusaders, minus the dragon, Scorpion King 3, minus the elephants, and creates its own sub-genre as Sword, Dress, And Sandals Flick HAHA! It must be noted that although Dragon Crusaders came out first Warrioress was filmed first. For more info on Cecily Fay Check her interview. Warrioress is far better than most of the SyFy aired movies and should find a home in the U.S. Film Market, in addition should screen well at U.S. Comic Book Conventions. Overall I rate Warrioress a sexy, violent, sardonic ride, and a 7 out of 10. Worthy of a purchase! Cecily Fay is just amazing!

Watch for contests, more interviews and other Warrioress surprises on Dan's Movie Report during the rest of 2014!

Please read the detailed interviews with Cecily and Zara on Dan's Movie Report to get ready for a new wave of U.K. action! Ladies who surprise, can  kick ass for real, not just on film.

Posted by Dan's Movie Report-Danny Templegod at 4:15:00 PM No comments: