Greetings fellow independent movie buffs, the good folks at MTI have a few interesting releases on their schedule from April to June. Here is the info direct from MTI: Look for up coming movie reviews from Dan's Movie Report.

Coming in April, 2011
Chicago Overcoat
The fates of an aging hitman and a washed up detective become entwined when one last job leads to one last chance to settle an old score.

"The most charismatic mafia murderer since Tony Soprano." - Variety

"Fans of The Funeral and The Boondock Saints will eat this up." -Chicagoist

Coming in May, 2011
Gene-Fusion
In the year 2310, a new sport, Gene-Fusion is all the rage! In this exciting game, specially-trained athletes, called Fusers, design their own super-creature by combining three forms of animal DNA... Four teens, seemingly plucked from obscurity, are trained to be Fusers. They become instant celebrities as they perform before sold out crowds. But what they don't know is that each of them has a role to play in an alien conspiracy to take over the world. Only through learning to work together as a team can these four, young heroes take on this alien threat and save the planet from destruction.

Street Date: May 10, 2011
Death Hunter - Werewolves vs. Vampires
When his wife is abducted by a group of blood-thirsty Vampires, John Croix is left to die in a forgotten region of the desert. It is here where an unspeakable evil exists. Now, by no choice of his own, Croix will come face-to-face with the most terrifying creatures of the night. Still a man, but possessing all the strength and power of a werewolf when the moon is out, Croix becomes a reluctant hero for mankind when he learns that his wife may still be alive. Croix sets out on a mission to rescue his wife - venturing deeper and deeper into the Vampire's lair- in his quest to save her before she is lost to the world of the undead forever.

Chained
Let out of jail after five years, Julian is rewarded by his crime syndicate for keeping quiet. He is put in charge of a gentlemen's pleasure house (the Hobby Farm) and trusted with the proceeds from illegal gambling, drugs and sex slavery. But the women he meets -and the secrets he carries- proves deadly... When faced with the horrific treatment of one of the enslaved girls, newly brought to the farm, Julian must overcome the demons of his own past and turn against the only life he has ever known, to save the girls, and himself.

For further information on these releases go to http://www.mtihomevideo.com
Posted by Dan's Movie Report-Danny Templegod at 11:56:00 AM No comments: 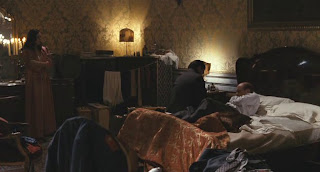 Picture is Monica Bellucci (Freida) watching on frustrated as Luca Zingaretti (Valenti) gets his morphine fix.


Hollywood often wraps up movies into a simple, neat little package to satiate the audience with car crashes, explosions and boring dialogue. The hero survives, and everyone leaving the theater has a warm fuzzy feeling either driving home or after watching the DVD. In several foreign films, such as Irreversible, In My Skin, and Sanguepazzo, the subjects are neither warm and fuzzy, nor are the protagonists in good shape at the conclusion.

Sanguepazzo (Wild Blood) follows the true story of Italian actors Luisa Freida (played by Monica Bellucci) and Osvaldo Valenti portrayed by Luca Zingaretti. Their tormented relationship, Luisa's rise to fame, the substantial drug use and suspected consorting with Germany's Fascist Regime. Please be advised as a viewer, this is a long 2.5 hour film with many lines of dialogue. I watched in the original language, but had to do the subtitle reading.

This is a very important film as the parallels can be drawn on today save for the fascist part of it. Being with the backdrop of WWII they were constantly in search of a new fix, new films and new ways to love and have some semblance of a normal life.

There lives were so dramatic, way more so than any of their films and watching Luca Zingaretti jump into the role of the doomed 30s and 40s Italian star is refreshing. He was a bastard, egotist, but so talented is the impression I had of the Valenti character. Luca commanded the screen and was amazing to watch.

The initial calming force Freida is brought to life by Monica Bellucci. This is a difficult character to play as it requires subtle subservience coupled with seething energy. Watching the transformation as the film moves into the second hour is a true testament to how far this person would go to please her man, or be angry at his ways. Monica pulls it off, she is not only beautiful, but sensual. When she shows her anger it is refreshing and dynamic.

The filming is lush, interspersing actual World War 2 footage with movie footage. The action is more toward the final 40 minutes, as the director takes time to set up the characters. Camerawork, costumes, and sets are fantastic. They all set the mood of a 40s flick and is an impressive backdrop to the sordid character study.

My advice to potential viewers, is to briefly review the story of Valenti and Freida. Watch the movie uninterrupted the first time, by yourself, in the original Italian Language. There is a lot of dialogue, and it is important to the story. A second viewing with friends is an excellent idea to discuss the details. For anyone in the movie industry, watching Valenti desperately trying to preserve his films, the allegory, and symbolism is priceless.

This is not a perfect movie, however, I find it to be a sprawling and important historical drama. I do rate it a 7 out of 10.

This is a very hard movie to find. Amazon has it secondhand or www.deastore.com have copies available.
Posted by Dan's Movie Report-Danny Templegod at 2:00:00 PM No comments: