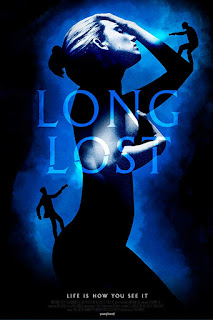 Above: Long Lost Poster, used for promotional purposes only

Greetings valued Dan's Movie Report readers. Across my desk today comes a tight thriller called Long Lost, basic in it's concept exuding an air of mystery and uncertainty. Gone is the gore, violence, and in your face easy to understand, by the numbers horror. Long Lost is one of those ethereal films, brooding in an under toe of emotion, honestly I did not know what to expect from scene to scene.

Premise is simple enough, young man invited to spend the weekend at a long lost half brother's house, he gets to the house and has to follow the many rules. Yep three main characters~ Adam Weppler as Seth (the young man) Nicholas Tucci as Richard (the half brother) Catherine Corcoran she portrays Seth's live in girlfriend.

The acting by the leads is remarkable, to be subtle yet forceful is an art form. Nicholas Tucci's demeanor is calm, yet pensive, seemingly not trusting of anyone. Weppler plays the young brother with innocence and reverence, he breathes life into Seth. What else can be said about Catherine Corcoran, she is a pro, wistful yet full of angst. Watching Long Lost unfold with the actors is a treat, and no way will I spoil the plot.

The elements are there, creepy music, clean settings, clear camera work. Long Lost works on all levels. Sparse at times, inviting at others, Long Lost goes in one direction, then throws the viewer off just enough to retain interest. I liken it to a roller coaster, that suddenly changes into a Tilt A Whirl! HAH, what the hell is going on!?! This is the akin to riding an entire park of rides, in one film!

Erik Bloomquist (The Cobblestone Corridor) has really created a work of art with Long Lost. Pushing the envelope of reality vs movie. It is a great film, winning awards at many festivals. April 10th the film comes out on VOD on various platforms. Long Lost rates a very strong 8 out of 10, it is my top horror/thriller pick so far in 2019.