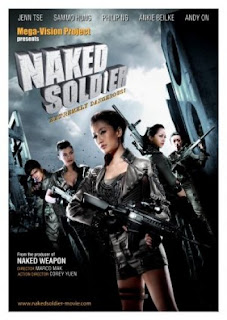 
A bit of history about the "Naked" series story-line, no this is not a porn film ha, in fact, ironically the first film was released in 1992, Naked Killer, check IMDB link http://www.imdb.com/title/tt0109412/  The film starred a slinky and violent, feline-like lady named Chingmy Yau. In 2002 a new film Naked Killer was released, effectively launching the career of Maggie Q, and marked one of the final films of HK actress Almen Wong. Fast forward to 2012 Naked Soldier marks a return of sorts to classic late 80s early 90s martial arts chop-socky with a few salacious undertones. I happen to enjoy movies of this type, so before a myriad of negative anonymous comments are posted, read up on other films of this type and draw your own conclusions.

Naked Soldier is a story of revenge and follows the entire series premise is loosely based on the concept of sultry girls programmed at a young age to reject all, and train to become hired killers. By the time the ladies are adults, they are refined sexy and most of the "kills" are either call girl style or sneak up and attack.

Above Pic: Sammo suggests Let's eat out! hmmm! Sammo is #1 in action and mass consumption, haha!

Naked Soldier opens in 1995 with Sammo Hung as a Police inspector CK Long solving a big drug case. Shortly after the case is broadcast on TV, during a family celebration a team of assassins merge on his house and murder his entire family. Long escapes, wounded from the blast. His daughter, is kidnapped and brainwashed, to think the only family she has ever known is Madam Rose's sniper organization.

Fast forward 15 years, the greying Long returns to the force and is once again back collaring drug organizations and his daughter, portrayed by the sexy Jennifer Tse, becomes a ruthless assassin named Phoenix. She is sent one a mission to killer her father.

Above Pic: Towel Fu! A well placed foot, a wrapped up towel, blam, out go villians three times your size.

Although there is some dialogue this Wong Jing film, like most of his earlier films, Naked Soldier is about the action. The fight scenes are tight and very well choreographed, the highlight being the originality. There are several weapon types used, including sai, swords, knives, some cleverly concealed ones, and a towel? Yes a towel! Naked Soldier first in the art of towel-fu haha! The ladies are of course in on the action. Phoenix and Selina, portrayed by a platinum blond Ankie Beilke, have quite a memorable one in the final portion of the film, full of peril on all sides.

Unlike the first two the sexuality in Naked soldier is downplayed except for a scene where there is the towel fu, because it is filmed in a hot tub. Pushing the sexuality a bit to the back allows more time for story and action. Sammo is solid and actually his brand of humor the script even pokes fun at his heaviness. Watch for actor Andy On. Andy had his HK film Debut in Black Mask 2.


Lighting, camera work and scenery are all well thought out, and intersperse seamlessly into the production of Naked Soldier. Many shot angles are used, above, below, and around the fights, offering a cool perspective on them. Some slow-mo some fast action, Naked Soldier mixes things up to keep things different. This is only Jenn Tse's third film, and overall I think she does a decent job with the acting and the action, she has room to improve of course, and I look forward to witnessing the progression. Her brother is HK film veteran Nicholas Tse.

Overall I really like Naked Soldier, and recommend it as a must buy for martial arts film fans. I rate the film an 8 out of 10. The film is currently available in HK, hopefully a US release date.

Posted by Dan's Movie Report-Danny Templegod at 10:11:00 PM No comments: