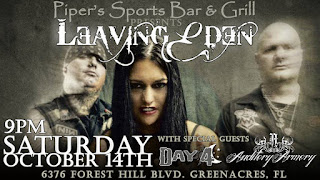 Dan's Movie Report, takes a musical turn to the party in Green Acres Florida on Saturday October 14th, as Leaving Eden from Boston headlined a magical night of female fronted music at Pipers Bar and Grille. Pipers is a great live local venue that is super artist friendly and run, owned, and managed by bassist Greg Watts.

Having a soft spot in my metal heart for Auditory Armory, I was thrilled that they made the trek down from the Orlando area. Starting a bit after 9pm the show was kicked off in grand fashion, with their unique sound and blistering rhythm section. 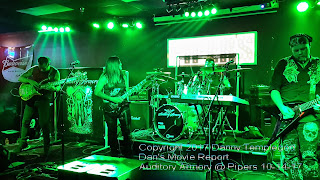 A bit of old and new permeated their set which includes a Type O Negative cover. Great set and April's between song banter, will um, make some fn noise get the crowd riled up. Total pro's Auditory Armory has a wealth of live experience, and is ready to rock the moment they arrive.

The second band Day 4, I knew very little about, played some cover tunes, and were pretty fun, perhaps the highlights were a Stevie Nicks cover. The crowd liked them, as the music they played was familiar.

Leaving Eden took the stage around Midnight and let us say, Eve was ready to rock. The three piece band had a bass backing track for a full sound, but damn it, the stage presence was off the charts. Eve was bouncing around the place taking hats off of the patrons, she must like hats. The cool thing, everyone was really into it. She was off stage a bunch and involving everyone in the music. Piercing guitars and crunchy drums made rock seem like back in the cool 80s stadium days, yet a personal sound. Eve's voice is heavy, yet subtle at the same time, she could peal paint off of a wall, yet, repaint the same wall a few seconds later. 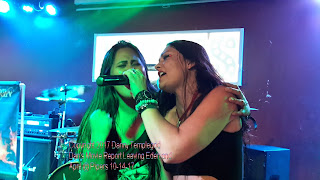 The highlight of the night was something I thought not possible, when April, the usually immovable object in slam dancing not being able to be knocked over, and or moved, and I were singing and enjoying Leaving Eden by the stage Eve came up to her and said come on stage first with a gentle tug then a full tug of war pull with both hands. I am assuming if April says no, Eve would probably put her over shoulder and make sure she has fun. HA. Once that happened the flood gates opened during the Alice In Chains number and everyone in the audience was singing and bobbing their head. War Pigs was also played, and again, the crowd was involved. Leaving Eden's original music is really good, as they played stuff from their new CD.

All three bands were super friendly and had a great vibe going on, Leaving Eden should break out, and deserve to be playing huge places. Ended up picking up some new Auditory Armory merch along with a couple of CDs from Leaving Eden and a poster.

Posted by Dan's Movie Report-Danny Templegod at 6:41:00 PM No comments: