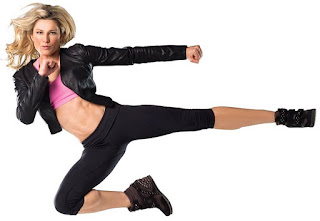 With dozens of A list projects under her belt, Heidi Moneymaker is at the top of the mountain for stunt work. In 2015 Heidi plans to climb bold new peaks as she introduces the world to her acting talents in a new short horror film with Zoë bell called 'No Touching'. In addition to broadening her horizons in acting, Heidi expands her reach with an exciting new exercise routine called 'Fierce Lotus' for women. Get your safety harness ready action fans, another exclusive Dan's Movie Report interview commences, say hi to Heidi Moneymaker!


Chat about your background, and your first desire to get into working on film stunts, and first big break?

When I was a child, I would never sleep. I would run circles around the living room until I got so dizzy I would fall over. I jumped on or off anything I could. My parents were legitimately concerned there was something wrong with me. There was a gymnastics gym near our home and they decided enroll me. I believe the idea was for me to burn off some of the energy.  It worked, but I also fell in love with the sport and rarely left the gym. I earned an athletic scholarship to UCLA for gymnastics. When I finished competing, I started doing some commercial work and was passed a few "stunt" jobs through other gymnasts who had gotten into the business. My first few jobs were literally just doubling actresses doing gymnastic routines. My first big break was on Charlie's Angels: Full Throttle. I was hired by the stunt coordinator, Mic Rodgers, for a quick four day simple job. He took me under his wing and gave me the opportunity to perform many of the films stunts. I never looked back... I was home!

Shifting gears to The Avengers series of films, share a particularly amusing or interesting story about life on the set of the blockbuster film.

The Avengers series, and of course the accompanying Captain America's and Iron Man's have been so much fun for me. We just wrapped Captain America: Civil War, and I still come out of my trailer in that black suit smiling. It never gets old. I think what has made the biggest impression on me working on these films is how genuine everyone is. It is like a really great family. Everyone works really hard and helps one another out. The actors are amazing and put so much work in to their action, and the stunt teams have really been amazingly talented and so much fun to work with.

With regards to stunts, do you prepare differently for wire-work stunts as compared to fighting?

The best way to prepare for any stunt is to already be prepared. I stay as physically fit as I can year round, fitness training, eating a very healthy diet, working fight scenes and reactions, and constantly coming up with new ideas (stunts, fights, action).  Wire-work usually takes a lot of core strength. You also usually end up slamming into something hard and smashing to the ground, so this is why practicing reactions and hitting the ground (usually a softer ground) is really important to do when you are not working. It keeps your body strong and in shape to take these hits. Fight training is a whole other beast. Nothing trains you for fights except training fights. There is a certain type of cardio involved that I haven't been able to achieve even with sprinting or high intensity interval training. Basically, you train punches, kicks, reactions, flips, and anything else you might put into fight choreography, and then you put it all together and repeat it over and over... until you fall over, lol.

Doubling actresses, do you usually try the stunt first, and if they feel they can do it themselves, they do, or is it a case by case basis, perhaps detail some of the extensive work you did with Scarlett, with regards to the action in The Avengers.

A stunt double always rehearses the stunt whether or not they will be performing it. This way we can work out the kinks before it goes to camera. Any stunt that seems feasible and safe for the actor/actress usually means we try to get them to do it. It is much better to see their face and people love to know an actor is doing the action. Most actresses I have worked with are very interested in doing any stunt they can, especially Scarlett. She is a beast! There are times when I have rehearsed something that seems quite difficult, but she will try it and usually nails it on the first go.

Do you feel that the recent rise of the popularity in superhero films has helped the stunt community, or is it a double edged sword with more competition?

I think the rise in the popularity of superhero films is great. It gives more people a chance to get to play a superhero. I can tell you from experience, it is pretty awesome.

Being one of the top stunt professionals in the world, I ask your opinion, what needs to happen for the stunt people and coordinators to be recognized by the academy?

I am not really sure how to answer this question. Maybe if there were a "Best Action Hero" category. The actor and stunt player work together to make a character, so maybe the award goes to both?

I like that idea, as it rewards both, and promotes unity, between acting and stunt people. Perhaps chat about your most dangerous and also your most favorite stunt to work on, please share stories of both.

I am not sure what my most dangerous stunt was. I did a car transfer at 40mph on Fast and furious doubling Michelle Rodriguez. I had a safety line, but it would only have kept me from hitting the pavement not from hitting the other cars involved or getting sucked under a wheel necessarily. I did a 100 foot descender upside down, attached to another stunt guy with a camera mounted on my back simulating bungee jumping on CSI:New York, which felt dangerous. It is hard to say, because often, it's those stunts you feel are no big deal that end up going wrong. My favorite stunt was a cannon roll in a car I had the opportunity to perform on The Host.(It is here in my action reel: https://www.youtube.com/watch?v=VWdejiEDBto) I guess that one can be considered dangerous...

Very true, some of the worst injuries happen on stunts that seem easy. Do some ladies you double surprise you in the action aspect with how good they are? If you are able to name a stunt that you thought that you would have to preform, that the actress did I would love to hear about the story.

Scarlett used to surprise me, but now I am used to her badassness. Michelle Rodriguez is no surprise either, she is a tough and talented lady. We had her hanging off the side of a tanker truck, dragging her along the ground and more recently taking the wrath of Ronda Rousey in Furious 7.

I think that you absolutely helped her transition to fulfill her action potential. Speaking of potential, I noticed virtually all of your credits are stunt related, do you ever see yourself transitioning to strictly acting? How about aspirations behind the camera coordinating or directing?

I really love acting. It was hard to pursue in the beginning of my career because the stunt jobs were so enticing and so much fun. As I have gotten a little older, I have pursued Action Acting much more. It is really fun to completely submerge yourself in the character, physically and emotionally. I have started making a few short films on my own which has been so fun. I wrote, acted and directed a short called, Behind Every Great Man, (https://www.youtube.com/watch?v=XJPooJEPoUM), last year, and I realized I am very interested in directing. I am about to shoot another short in a couple weeks with the legendary, Zoë Bell, called, No Touching. (https://www.facebook.com/pages/No-Touching-Starring-Zoë-Bell-Heidi-Moneymaker/364199213735358?fref=ts). I hope to get the opportunity to play some great characters in the future.

Speaking of the future, please chat about some of your upcoming projects and charitable causes you support.

I have a few future project possibilities lined up. One would be an acting role, so I am hoping that works out. Nothing is every set in stone until you sign a contract in this business. I plan to train a bit this fall for some upcoming stunt work in the beginning of the year.

As far as charitable causes go, I have always wanted to share my knowledge of health and fitness. I would like to contribute to ending childhood obesity.  I am starting a company with long time friend and fitness expert, Lisa Newman.  It is called, Fierce Lotus. (https://www.facebook.com/pages/Fierce-Lotus-by-Heidi-Moneymaker-Lisa-Newman/379722282230596?fref=ts). Right now we are giving fitness and nutrition tips via Facebook, but we are in the process of creating individualized fitness programs for the busy women of the world. We are creating a tribe of warriors and empowering women to be fit and healthy. I believe there is no way to end childhood obesity without first ending adult obesity. So, here's to this first step!

Heidi, thank you so much for taking a bit of time from your hectic shooting schedule to conduct this detailed and thought provoking interview. Watch for more on Heidi, as 'No Touching' begins production, on your home for exclusives, Dan's Movie Report.
Posted by Dan's Movie Report-Danny Templegod at 10:59:00 PM No comments: