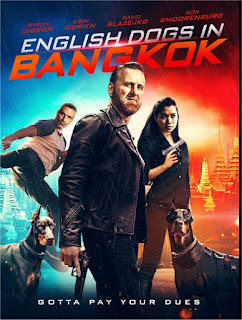 Above Image: Poster for 'English Dogs in Bangkok (C) 2020 Green Apple Entertainment, used for promotional purposes only not monetized.

Greetings valued Dan's Movie Report and Action-Flix.com readers. On November 3rd Across several platforms including DirecTV, Amazon, Verizon, and Spectrum 'English Dogs In Bangkok' is being unleashed on a global stage from Green Apple https://www.greenappleent.com/project/english-dogs-in-bangkok/ English Dogs is a gritty, underground, hard hitting action film that fires on all cylinders. As usual, this will be a spoiler free review.

Synopsis: In the streets of Thailand, a trail of destruction and mayhem ensues when a notorious soldier (Byron Gibson) and criminal kickboxer (Ron Smoorenburg) join forces to become the biggest illegal steroid supplier in Asia.

Byron Gibson plays Byron, and has completed an extensive interview about his character and other projects he is on, I encourage readers to read his interview. https://action-flix.com/2020/10/23/english-dogs-in-bangkok-actor-byron-gibson-interview-2020-dans-movie-report-action-flix-com-exclusive/

Our chat does not spoil the plot of the film, yet offers insight to the type of action film 'English Dogs in Bangkok' is, including detailed explanations of some of the fight sequences.

The film actually takes place in two separate locations, London and Thailand. Director and writer Taffy Edwards successfully merges both starkly contrasting locations. The movie opens with a set up in the London area where we meet Byron, his ex-wife played by the amazing Leigh Barwell (Tracy), and Australian Strong Man winner David Blazejko . The pre-title sequence gives the audience a brief, yet brutal set up and soon we are wisked away to Thailand, where Byron meets up with Ron Smoorenburg's character Dutch, along with a few other unsavory characters including Anastasia played by Merle Alexandra

Byron tells me in his interviews that there is a comfort level working with many of the same people in his films, obviously this is not always possible. In 'English Dogs in Bangkok' he was able to have the talented Mark Stas as police Inspector Somchai. The amazing Dean Alexandrou, director of 'Haphazard' plays Bounce and Eoin O'Brien portrays Conners. The entire cast knows action, and enjoys working in this setting, Alexandrou even lensed one of the fight sequences.

Dialogue wise, this is a British Gangster film, the English is stylized in a distinct accent from the British characters, probably will play best in headphones or with the volume turned up. Not the fault of the actors, be prepared though to listen carefully as the banter between actors is at times very serious, and at times sardonic and sarcastic. I watched the film two times for this review, once regularly and once in headphones, I will say more will be appreciated if you have the opportunity to do this. I am sure at the cable level English Subtitles will be used, and for the global audiences, subtitles in the various territories.

Musically the film is excellent, spot on timing to set up the fights and transiton from action to dialogue. Composer Nathan Evans is to be commended for his efforts. The backing music is provided by New York's Finest Hardcore Superstar DANNY DIABLO with backing vocals from the Everlast (House of Pain) and Rancids Tim Armstrong on the Track Sex and Violence. From the UK we have the amazing Nave supplying many of the tracks and his band THE DELTORERS. The musical tracks are as hard hitting as the fists!

Actually all of the behind the scenes work is top notch including editor Brent Zillwood who had the difficult task of merging the two settings together all the while keeping with a very tight 85 minute run time. Camera work is very good as well, with

Action fans of course are here for the action, fights, fluid movement! Ron Smoorenburg serves as fight coordinator, virtually everyone involved is in on the action! Mark Stas also is of course involved in the stunts and action as well. Byron states in his interview he wants his fights to seem somewhat realistic. His has a encounter with the Australian who outweighs him by close to 100 pounds so to make the fight believable a set of metal knuckles, the UK term being knuckle duster is used to even the score slightly, and I mean slightly, hah no spoilers! Each fighter has their own style of action, and their particular strengths are evident, Ron Smoorenburg has great kicking and punching ability, thus his skills are also employed. Leigh Barwell uses her guile in the beginning, but when things get crazy near the end she also gets involved, again no spoilers!

My minor grips are the length of the film at 85 minutes including credits crawl is a tad short, though things seem to work out. Due to the various areas and times being shot there is a raw edge to the cinematography and possibly could have used a bit more of color correcting, that said, the action and dialogue was clear, but at times over or understated. A watch on a larger screen seems to be better, yet, with the edits, which are excellent, it may take awhile for eyes to adjust. The scenes themselves are great, yet again with the short running time, the audience is not allowed to soak in the moment. 'English Dogs In Bangkok is a high intensity film that must be watched in it's entirety, completely uninterrupted.

Overall, minor quips aside, 'English Dogs in Bangkok' is a great example of what can be done with passion and creativity on a smaller budgetary scale. Kudos to the entire cast and crew, 'English Dogs In Bangkok' rates a strong 8 out of 10, a must own! I really hope eventually a DVD or physical release happens, as I would like to view some of the outtakes! Keep on the lookout for new interviews from 'English Dogs in Bangkok' stars Leigh Barwell and Ron Smoorenburg later in 2020! https://action-flix.com/2020/10/21/english-dogs-in-bangkok-and-bet-dead-casino-unleashed-2020-dans-movie-report-action-flix-com-exclusive/

The film has secured release on three cable U.S. networks, Spectrum TV DirecTV, and Verizon. Amazon will have the film in the USA and in the United Kingdom, Amazon https://www.amazon.co.uk/ beginning November 3rd.

Keep checking back for various other territories being released soon, including India, Spain, Australia, France, and Canada. More news to follow.

Posted by Dan's Movie Report-Danny Templegod at 10:24:00 AM No comments: 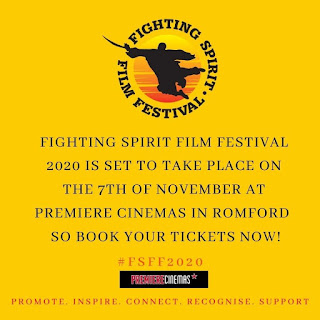 Above Image: Fighting Spirit Festival Logo and new photo from their Facebook Page.

If you plan to be in the United Kingdom, please make sure to book tickets early, as all social distancing measures will be followed!

The feature film line up will be amazing as Tribal: Get Out Alive will screen and a Q & A will follow!

Please Check out the USA reviews for Tribal! No Spoilers!

There are two programs, the short film program and the feature film program. A day pass can also be purchased.

Please note this will be split into two sessions.

Great work to all involved for making this LIVE 2020 Event happen!

I had the opportunity to view and judge a couple of the short films involved from IDTV Action Fest, this will be a stellar line up of shorts as well.

Support action, and support indie cinema! More to follow! Respect to all involved in making this live event happen!

Posted by Dan's Movie Report-Danny Templegod at 1:18:00 PM No comments: