Greetings Dan's Movie Report readers. Later in 2016 will see the release of the female centered action film "Lady Bloodfight" Actress Jenny Wu will have a prominent role and sits down and chats about the film's production process and also her involvement in the Jackie Chan film "Dragon Blade". Time to unwind, grab some tea and get ready to be Wued! By Jenny Wu!

Share a story not on your official site about your background and desire to act? Was there an event that made you say allright this is what I want to do?


I always knew I wanted to be an actor and there was never going to be another backup career or alternate plan. I remember my parents were always very much against me pursing acting, as I come from a traditional family background. And I can recall that the more they prevented me, the more I persisted. Sometimes breaking through the limitations others may place on you gives you more courage and determination. And so here I am. And of course, these days they are very supportive…. well… I guess they have no choice. Ha!


I saw you did a short film called" Drown", what is that story about? Concepts, share a story from production. Is it available in the US?


If you call it a short, Dean Francis, the director would be very upset. Took him a long time to pull it together. Drown is an Australian independent feature film and I had a very small involvement in it, most of it ended up on the cutting room floor. If you blink you’d miss me. So make sure your eyes are wide open throughout all 90mins of the film if you want to see me. It is essentially about homophobia and so the story follows three boys. I believe you can find it on DVD in the States.


Lady Bloodfight, how did you become involved with the production?


Luck? Haha! I often ask myself, did I land this role because I’m lucky? That I put myself in the right place at the right time? Or is it because I’m good? A talented actress? You know Katharine Hepburn once said, “most of the people involved in any art always secretly wonder whether they are really there because they're good or because they're lucky.” I guess a combination of both. And I believe you can always create your own luck. A lot of hard work goes into what I do on a daily basis so when the opportunity presented itself I was prepared. Success is what happens when preparation meets opportunity.


In fact I was auditioning for Wai, but when I met Chris Nahon, he felt I was too young for Wai, and so I read for Ling. And the rest was history…. well not really…. the rest was several months of hard work.


What attracted you to the script?


One of the biggest attractions was the characterization of Ling, on the page the role just jumps out, but of course, this is very biased because it’s coming from me and I played her.


When I first read the script, it was unfinished, two and a half acts, without a third act, but I was already drawn in by then, I read it in one breath, without having a coffee break in the middle, so that says a lot. We reworked several scenes while we were on set, as with a lot of movies, nothing is set in stone, until it gets finished. 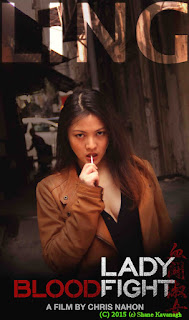 Your character Ling, describe her, she is a bad girl positive force etc.. seems her character is steeped in mystery.

Hmmm…. I wonder how much I should talk about her without giving her away. Maybe I’ll let her be steeped in mystery.


Ling’s journey parallels Jane’s in that she goes through a transformation and then faces off with Jane. She’s a street baby, a wild baby, an alternative baby, with a fierce heart, but deep down, she’s just trying to survive.


You could call her a bad girl, I mean she likes doing naughty things. I won’t describe what these naughty things are, you’ll find out in the movie… Yeah she’s bad, she’s real bad, but cool bad, if there is such a thing. She’s super cool, and super bad. So she’s cool bad. 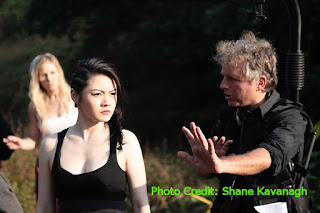 What was your favorite aspect of working on Lady Bloodfight, the fighting, or the interplay and the fact it was all female characters?


Haha, my favorite thing on Lady Bloodfight is….. drumroll…. all the sexy ladies, because the cast were all so sexy. To be fairly honest, it was a tough set, most of the fight choreography were changed in the last minute with very little rehearsal before shooting, sometimes, actually most of the time, we were doing new choreography and stunts on set, I guess a very Hong Kong method.


So I was doing my first ever wire work including a difficult stunt on the day of shooting without any prior practice or training, I think everybody was praying for me! So at times it can be very stressful, because you are doing something dangerous without really knowing what you’re doing at all, and all you have is your gut instincts, and of course lots of instructions thrown at you in the last minute, thrilling as well as numbing.


I remember on Dragon Blade, Daniel Lee said to me that you exceed your usual abilities when you are working under stress. In that if you are a normal woman, then under stress, you become super woman. That couldn’t have been more true for Lady Bloodfight, I have to say I have never performed, fought or acted so well. The stress lifted my game. Thanks stress!


Any situations or setbacks from Lady Bloodfight you had to contend with? Anything you would change?


I think you are fetching for goss.. here. What happened on set stays on set. I cannot reveal who hooked up with who, haha, my lips are sealed.


HK and Asia market question, how is the landscape for filming now?


I am no Asian film market expert so it would be wrong for me to comment on the filming landscape or give you any statistics. I will give you my opinion though, hehe… Chinawood is very exciting, it’s bustling, they are producing a couple of hundred films a year, and it seems everyone wants to jump into bed with them, especially Hollywood, and maybe Bollywood too. So I guess I’m a crossbreed, born from the sheets of Chinawood and Hollywood.


Chat about upcoming projects in Asia. What films are you working on new projects?

In a nutshell, I have a Chinese feature film about to be released in China this year, its literal translation is “That Year When I Promised You”, there’s no fighting in it, only love, lots of love.


I have a TV show airing in China, date not yet locked in, which I star in opposite two major Chinese celebrities, lots of love in that one too, actually I play the love interest.


I have a new project coming up…. I can’t talk about it at the moment… maybe save it for the next interview, otherwise I may run out of things to talk about.


And oh, of course I’m always on the look out for new projects. 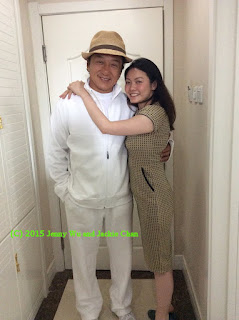 Dragon Blade, Share a story from the massive production,what was your responsibility as it is listed on as Asst Director, were you involved in other aspects?


Dragon Blade is the biggest budget Chinese blockbuster to date, so yeah it’s massive, lots of actors, lots of crew, lots of extras, lots of atmos, lots everything, we have up to 1000 people on set everyday. I was on the project for almost 7 months, and you know what that is like in terms of film set time, it is like having been in a 7 years relationship. So much happens in one day, in one hour, in one minute, that you can be loved one minute and invisible the next, and no body remembers what drama happened in the morning because they are dealing with the drama happening right now. And yesterday? Huh? What’s yesterday?


My responsibilities grew throughout the production, they must’ve thought I was super woman. At one point I had to teach this song to 100 or so Roman Soldiers, most of them from Russia or Ukraine, so they couldn’t really understand English or Mandarin, I mean what the heck, the song was in Latin anyway, so it didn’t matter. Music transcends languages.


Share an funny or unusual story from production about Jackie, and perhaps about Adrien Brody and Cusak, must have been very interesting on set, and how long did it take to shoot the project?


The first time I saw Jackie was the first day of shooting, and I was very star struck, I was like OMG that is Jackie Chan!!!! Then before I knew it, I was sharing a lift with Jackie, I was in the same hotel as Jackie, I was invited to dinner by Jackie, Jackie was talking to me… huh? Yeah he was talking to me. I was riding in Jackie’s car. I was in Jackie’s trailer, I was giving Jackie advice on script and dialogue, he was asking for my opinions….. oh wait…. what had the world become? The world had just turned upside down!!!! Jackie Chan was asking for my opinions on script and characterization???? That’s unreal. The world had turned upside down!!!


Shifting gears to chat about Jenny. What producers and directors in the future would you like to be in films with?


Wow this is going to be a long list if I list all of them out… I’m very open at this stage because I cannot chose to be picky.


Are you eventually looking to aim to the US market or is Asia your main focus?


The million dollar question… Hollywood vs Chinawood… Spray and pray baby! Spray and pray! Why not do both? I’ll combine the two!


You know I’ll go where the work is. If one of my movies open in Nigeria and gets a warm reception there, and I get invited to do a movie in Nigeria, hell yeah, I’ll do it. There is nothing more exciting than shooting in exotic places you’ve never been before.


Closing thoughts, chat about what is coming in the future,  goals and ideas. in a decade Jenny Wu is?


If you had asked me this question a decade ago about where I would be now, I would have said I don’t know, maybe a decade older? I would have never guessed so many adventures could have been crammed into the last two years of my life. I think life is very funny, it never ceases to surprise you. And of course the experiences are priceless, they are what makes up the sum of you. All I could hope for is that this trend keeps up.


And I wish I have fortune telling skills but I simply cannot tell my own future. I know I have a goal, and I persevere. They say “perseverance is a great element of success, if you only knock long enough and loud enough at the gate, you are sure to wake somebody up.” I guess I’m on the right track then. Phew!