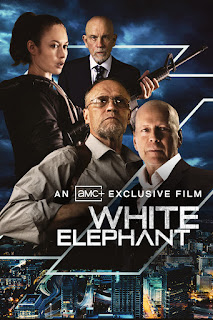 Above Image: (C) 2022 AMC+ All Rights Reserved, image used for promotional purposes only, not monetized.

Greetings valued Dan's Movie Report readers. It is time to unleash a brand new interview with the man behind the action of the spectacular new film on AMC+ 'White Elephant' Luke LaFontaine is a man of distinction, crafting intricate action sequences, allowing for the actors and stunt personal he works with to reach beyond their limits. Luke is a hard working honest guy, willing to let you know exactly where he stands. In this 2022 'White Elephant' interview Luke stops by to chat about working with director Jesse V. Johnson, Olga Kurylenko, and Michael Rooker. Enough of my babbling on, time for the textual ass kicking from Luke!

Danny Templegod: Luke my first question is the pre-production for setting up the action on 'White Elephant' chat about some of the work you were able to do with the stunt people prior to shooting, did you have an extended prep time due to the budget?

Luke Lafontaine: I didn't have a lot of extended prep time, even w the larger budget. I had about a week to get everything done, I prevised all the fights and and meeting with Jesse and Michael rooker. My LA stunt peeps really helped w Previs and Atlanta stunt performers went extra mile on location.

DT: I have massive respect for Olga Kurylenko as an actress and in action, she always gives 110% and, she has had a solid amount of action training, chat about working with her, and some of the new action tips you imparted on her for 'White Elephant'.

LL: Olga is fantastic , she gives 200% Olga told me she doesn't retain her training in her mind because its too much, so she lets it go after every movie. So I had to take her back thru firearms and fights, she hadn't done CQB knife fights, so that was new. Tip I imparted to her was to Breath during fights. She would hold her breath which was a lot harder. Olga is Amazing , her dedication,and attention to detail are incredible as well as her memorizing Choreo!! I loved working w her.

DT: Curious how long of a time prior to shooting the film you had to work with her as she was a central character.

LL: We actually had very little time to train, she was held up because of travel restrictions and US visa so we had 2 hours morning of shooting to go thru all firearms work, and a few 20 min sessions during week. I took her thru knife combat in an hour and ran her knife fight for about 20 mins before we had to shoot! Shes amazing at learning and performing fight choreo!!

DT: This is important to me, chat about the seriousness of having a proper armorer on set, one that is knowledgeable of the weapons used.

LL: It is of paramount importance to have an experienced professional Armorer on set!! Always! Firearms and guns that have been modified for blanks are always to be given full attention to safety, Zero exceptions!

DMR: Were there any stunts or action that was kind of left on the cutting room floor for runtime, curious, as I know action films often shoot for a possible extended cut down the road?

DT: Chat about the mixture of old-school and new-school guns and weaponry in 'White Elephant'.

DT: I hate spoilers, but chat a bit about the final house scene, how long did you have to set that up and shoot it?

LL: We shot interior of house raid on one day and exterior of gun battle the next day. It was a lot of action to get thru with 15 stunt guys, Olga, her double and Michael.

DT: Must have been a week of work crammed into those two days! I really enjoyed the motel scene with Olga as well, first of all it was well lit, second of all, I am sure Jesse chatted with you about action beats and specifics, but I am curious to get your perspective on working on this complicated sequence, looked like Olga did most of her own action here.

LL: Jesse laid out how he wanted the action, we has briefly discussed a 2 level fight but it wound up being motel with no 2nd floor. Blocked the action to feel real and hectic, with Olga taking on shooters from all directions. Olga did 90% of her action w Her stunt double Jessica Medina doing a long run and gun and the dive into mustang. 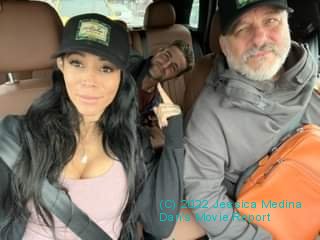 DT: Perhaps share a couple of amusing or crazy stories on set with an action sequence, that either had to be re-shot or worked out even better than planned.

LL: The action in final house battle got a little crazy w Michael ad libbing fight moves when rubber gun was knocked out of his hand. Thank goodness Michael is such a pro and nice guy and didn't hurt any of the stunt guys!!

DT: Chat about working with the amazing Michael Rooker, what are some of the action concepts you discussed with Jesse for him in the film.

LL: Michael Rooker is an incredible actor and physical performer. Most people don't know he’s a full instructor in Aikijutsu and kyoku shinkai karate. Hes been studying for decades! Very strong dangerous guy if he wants to be,as well as a loyal friend and defender. Love him to death, and I am humbled to have gotten to work with him so closely. 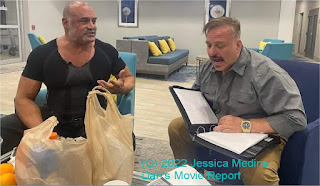 DMR: I really liked Rooker's character in 'White Elephant and him as an actor, moving on... I know your specialty is bladed weapons, chat about the knife action towards the end of 'White Elephant', military and covertly used, old school technique, I am assuming.

LL: Knife fights all came from real techniques. Both Olga and Michael had small knife engagements. Fights had to be short and brutal, because that's what real knife fights are. 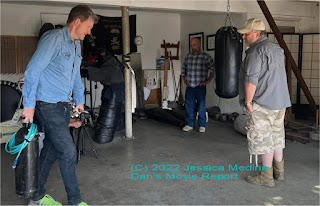 DT: Good point about the knife fighting, rarely in real life are they long. Chat about crafting the action with Jesse in 'White Elephant' what I really enjoyed was the action was NOT nonstop, and when it came it had impact and meaning. I am assuming this is by design, from your perspective, chat about the importance giving the audience time to breathe between the action.

LL: Jesse wrote the 'White Elephant' script a while ago and in his developing story. It was a honor and life shifting story. A dramatic thriller about an aging warrior and choices he had to make to sleep at night and keep his honor. The action had to convey the weight and risk. No popcorn, filler nonsense action. The pacing is different but all the intensity is still there.

DT: I agree, 'White Elephant' has no time for a shoehorned in love story. Wrapping up, I know it has been a long time since we chatted, curious if any films or TV shows you have watched for action made you stand up and take notice, saying ok, that is cool, I thought I read you likes 'The Northman'. 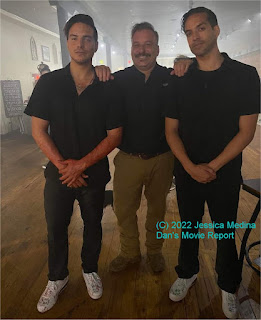 LL: Yes , there have been some movies ive taken notice of , I love the action In NORTHMAN and the action design in TOPGUN: Maverick was really impressive!

DT: Finally chat about advice to stunt people just starting out in the business, when you work with the director to hire a stunt team what are some of the qualities you look for?

LL: Up and comers, Stay safe and HUMBLE!! It’s not about you. The honor code of the un-named stunt performer making movie stars look good should endure. Why would you want to steal your movie stars thunder by posting yourself on Facebook and Instagram??? Try to uphold a code: safe, loyal, humble, Tough!!

Posted by Dan's Movie Report-Danny Templegod at 4:24:00 PM No comments: