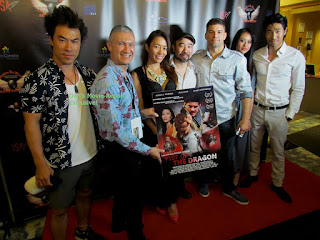 Above photo (C) 2016 Danny Templegod! Incidentally if you blow the photo up you can of course see Dan's Movie Report quote on poster, only two posters were printed from the fest, and deservedly they went to the lead actor Josh, and Maria claimed the second one though I did kind of think I should have it like a race up the stairs!

Juju has been featured many times on this site of course and a new interview will come when V-Force trailer drops! Maria will do one, I know I owe Xin one also and Josh, so hopefully in the coming months, we will see scheduling! So yeah as a proving ground to other indie writers prove that you like indie films! SUPPORT them, buy them!

The film leads collided for one weekend in the city of lost angels~ We all flew in from the non .LA. areas, Antony and Juju from HK me from Sunny FLA! Maria and Trung Ly from the land down under, and I must say it was a study in human entertainment, rather than snap a bunch of dumb ass pics I kind of observed and chilled with the crew from 'Fist of the Dragon' Watch this space and The Action Elite for exclusives in the coming weeks when my head is on straight again.

To listen to the goals and dreams of indie film people is inspiring, i think in life there are times you just have to fly across country to watch a film you reviewed almost 2 yrs ago, like when you are flying from the closest distance hahah well people that were their at the premiere loved the flick, and The film did well at AOF fest, so hell, Kudos to the entire cast and crew for coming this far, Josh Xin and my buddy Chyna along for the ride! I will soon lick this as after two years we will have a Maria Tran interview soon!

For all the AOF results go to their official page! http://www.aoffest.com/ 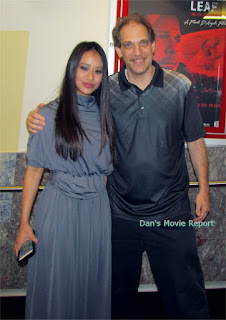 The new face of action Maria Tran and my big body hogging space haha! Go get it! First on the world to review I mean damn, I needed to see this in the theater! Watch for release info soon!


What is cool for me was Maria, who is a indie talent from Australia flew 20 hours not knowing she would win and in the MartialCon she was up against Cynthia Rothrock a true legend! True to this fest though, Maria was so violent and crazy in Fist of the Dragon she damn deserved it! That said I am sure Cyn and Juju will be fine, now ladies, no fighting, oh wait, please do!

Maria Tran just completed work on action film 'Tracer' in Vietnam, which I have not seen and worked on the latest Jackie Chan film as stunt attachment so she will be on the rise! Maria is a hard worker, and mentors youth in crises also.

It was also amazing for me to meet Juju for all of the material she did for my site the contests, etc the detailed interviews. I must say what I said two years ago, I guess I was kind of right, a whirlwind of coolness with drive and energy! 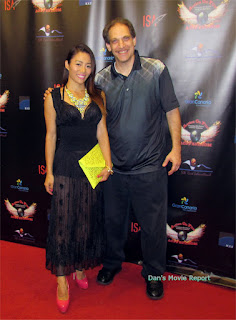 I have a respect for someone who has the drive like Juju does, a singular focus and dream! Plus her designer is such a cool person with an amazing story of courage this is a one of a kind dress! Check out her links @

What can I say about director Antony and the rest of the cast just the energy, drive, and determination and to have to wait what seemed like an eternity for it to come out!


More to come! go to the official 'Fist of the Dragon' page for all the breakdown! https://www.facebook.com/fistofthedragonmovie/?fref=ts

Please keep comments related to post, ads or flaming will be deleted.
Posted by Dan's Movie Report-Danny Templegod at 9:59:00 AM No comments: