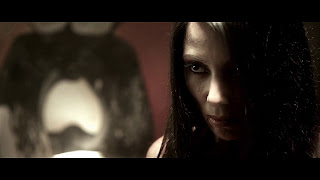 (Above Picture is Princess-(Rachel Grant) rather pissed)

As a viewer of several movies per week, more often than not I find myself fast forwarding through them to get to the meat of the story. Many independent films seem to have a solid premise but the story telling gets bogged down and the padding to add minutes to the production just lends itself to viewer fatigue.

Alex Ferrari, who also directed another fantastic short film entitled "Broken", comes up with a tight concept and story with Red Princess Blues. Basically at a tight 11 minutes it can either be a start, middle, or an end to a feature length film. The viewer is transported to a seedy bar where "Carnies" (carnival workers) hang out, drink, and carouse after work. In walks an innocent girl named Zoe and she soon is accosted by a grimy carnie Rimo (Richard Tyson). Tyson is excellent and gives a gritty performance as the antagonist in the film.

The star of the flick is Princess (Rachel Grant), a knife wielding carnie who does not take kindly to the surly old man forcing his will on the young girl, and soon takes matters into her own hands. Rachel is probably best known for playing Peaceful Gardens of Desire in the bond film "Die Another Day" She really gave it her all in this film attacking the role with intensity, anger, and passion. She can mix it up with the boys. Rachel needs to get more work in Hollywood, she has a clear speaking voice, an expressive face, and knows how to emote on camera.

Red Princess blues is a highly professional step up for Alex from the "Broken" film.
"Broken" while very good, had various limitations, such as lack of a true stunt coordinator and professional actors that Red Princess Blues has.

This fact makes the movie not only more watchable, but more fluid and believable. Everything from the sets to the detailed stunt work arranged by stunt coordinator Jeff Cadiente. Jeff is highly experienced Stunt Coordinator and has worked on several shows and films including "24" and "Hawaii 5-0". In addition to Jeff, stunt doubling Princess is Ming Liu. Ming has more than two dozen projects to her credit is extremely professional in her work ethic, and always ready for action.

The film also benefits from the use of the Red Camera. The Red is a digital camera that has the look of film, adds clarity, and a depth of field unrivaled, by current digital processes. Currently big budget movies like The Social Network and even the New Pirates of the Caribbean are using this camera.

Alex clearly put his heart and soul into this production and judging from the copious amount of behind the scenes videos on the official website, enjoys sharing the process with the viewer as he did with the "Broken" film. This is a refreshing trend in the realm of short independent films.

I firmly give this film an 9 out of 10 rating, and would recommend anyone with Itunes purchase it. Alex should get major funding for a feature film with his hard work.