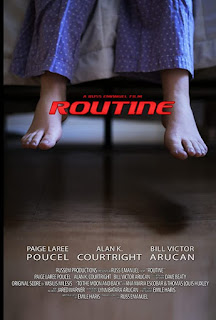 Posted by Dan's Movie Report-Danny Templegod at 8:00:00 AM No comments: 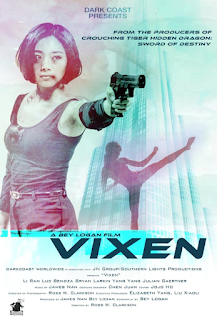 
Greetings valued Dan's Movie Report, Action-Flix, and The Action Elite readers. It is with a heavy heart I mention the passing of Max Repossi. To honor his short but memorable 33 years on Earth, I purchased his 2018 film called 'Vixen'. Producer Bey Logan told me what an amazing man he was, full of life and energy, he said “I still am processing what is happening”. 'Vixen' is an take on the Die Hard series of films with one single person, in this case a single female Chinese police woman. Actress Lie-ri Chen plays Lee, her small slight frame is a dichotomy to the guile and power she possess. Like S.S. on 'Under Siege', or John McClane in 'Die Hard', she has to navigate the halls of a huge structure in search of the terrorists that kidnap leaders!

The formula still works, now with many films choosing to go the car chase and such, the entire movie stays in the building thus adding to the tension. The action is really well planned, some parts are pensive some full on crazy. There is a mixture of guns and fights so the flow is smooth. 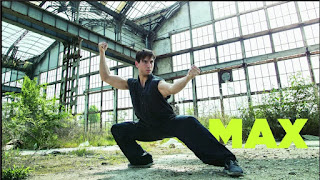 Above Max Repossi in a cool stance! All rights reserved to photographer image for promotional use only.

Director Ross W. Clarkson and writer Bey Logan craft an entertaining 88 minute film devoid of filler, rising above the more typical girls with guns standard. Max Repossi plays a dual character which you have to see, no spoilers. Once again his dialogue, though dubbed, and acting are crisp and clean. Max is also an assistant stunt coordinator on the film along with Bruce Zhang Watch for a cameo from Bey Logan as well!

Special mention goes to camera operator Guo-Ping Zhong and cinematographer Ross W. Clarkson the film is shot in a clean environment the fights are easy to make out, no crazy shaky cam, and the actors are well framed in the scenes.

Creativity points are gained on the unique ways Lee disposes of the terrorists, plus she also takes damage, so pain is shown, you know haha, kind of like a real fight! The acting is decent and no weak people dragging the film down, everyone seems ready for a tussle! David Johnson Wood plays the main Mercenary Commander, he is a bad guy and he makes sure the viewers realize this!

The entire production crew worked hard for the result:

Overall I rate the film a must watch, 7.5 out of 10. It is currently now on IMDB Movies as a FREE selection, or like I did you can purchase or rent the film on Vimeo! The release is from Shanghai Pictures and The Chinese Movie Channel

Posted by Dan's Movie Report-Danny Templegod at 10:48:00 AM No comments: