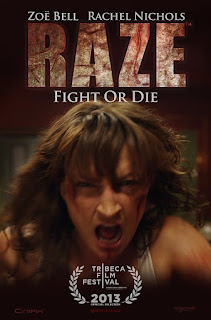 As the film fest gears up, several of the films key stars are also set to attend the premiere. To keep up with all TriBeca news on “Raze,” including live twitter discussions with the cast, behind the scenes red carpet events and the upcoming release of the movie trailer, be sure to check out the official “Raze” website at www.razethemovie.com and follow them on twitter and facebook @razethemovie.
Posted by Dan's Movie Report-Danny Templegod at 1:53:00 PM No comments: