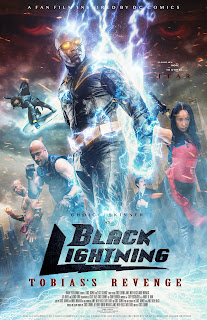 Thanks to producer Choice Skinner and his group for an early look at the new short film Black Lightning Tobias's Revenge Part 2 ahead of it's debut screening at Urban Action Showcase and the online release November 14th. Existing in the shadows of the DC universe, Black Lightning is a spirited fan film, that follows the adventures of the title character, and also introduces a few new characters.

The 19 minute short film has some really cool action sequences, coupled with amazing costuming and weaponry. Time was taken to get the dialogue to be forceful and entertaining. This is part two and expounds on the set up taken in part one. Watch out for the introduction of Lady Shiva. Sexy siren Sachiko Ishida adds an air of sultry bad assery to the production. The film has it's premiere at the Urban Action Showcase and then will be unleashed online November 14th. Very good fan film effort and hope to see some original material from the team soon, Black Lightning: Tobias's Revenge PT 2 rates a 7 out of 10.