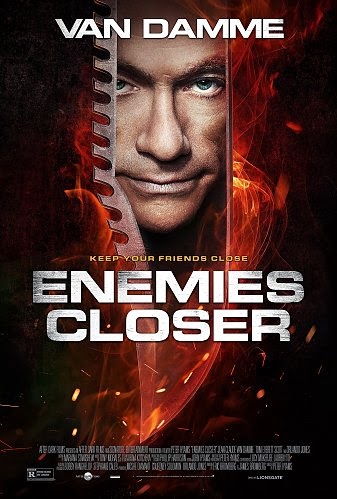 Honestly  I had no information about about Enemies Closer prior to watching the film. I usually enjoy watching films I know nothing about. This movie involves drugs and a ruthless, yet nature loving bad guy named Xander played by Van Damme. The movie opens up with border patrol agents searching for a plane that went down near an island, and drugs are suspected. Van Damme and his group pose as Royal Mounties and offer assistance, but in reality, they just wanted  the location that the plane went down. A huge fight breaks out and let me just state that Van Damme is the villian and the good guys are dispatched.

The movie progresses at a rapid pace, even though the audience is never clued in on the origins of the drugs or any other set up. The two other main characters are Henry park ranger with military experience portrayed by Tom Everett Scott and Clay (Orlando Jones) a man hell-bent on revenge because Henry got his younger brother killed. 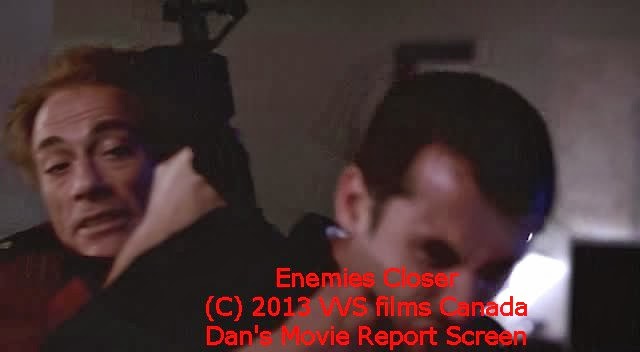 Most of the action in Enemies Closer involves outside foot chase scenes and gun standoffs. There is some fighting, Van Damme engages in, but it is not the focus of the film. There is gun violence throughout, so be prepared as martial arts are definitely on the back burner in Enemies Closer

Sadly the dialogue in Enemies Closer is not good, and at times rather silly. Van Damme should have been given better lines, rather than spouting off about being a vegan before killing guys in cold blood. Running at barely 80 minutes until closing credits, the film wastes no time getting into the action, but because little is known about the characters, there is no impact or importance when one dies or a major event takes place.

A secondary role is filled by actress Linzey Cocker who portrays Kayla. Her character is actually given depth even though she has limited screen time. Additionally Christopher Robbie plays Sanderson, a colorful old man who lives in the forest, and just wants to be left alone.

Overall Enemies Closer was decent, but lacked depth and is one of those watch it and forget it films. I rate the film a 5 out of 10. I know how amazing Van Damme is, and Enemies Closer is not a great film for him to display them.

For more info on Enemies Closer go to the official Facebook page @ https://www.facebook.com/EnemiesCloserJeanClaudeVanDamme

Posted by Dan's Movie Report-Danny Templegod at 7:12:00 PM No comments:

As a writer on an independent site I get so many notices of Kickstarter Campaigns. Mostly I ignore them because I either don't know the main person involved, or I just don't believe in the project. A couple of weeks back I was informed by Arlene Barshinger about a project called DATELESS http://www.kickstarter.com/projects/688406154/dateless-the-series-come-be-a-part-of-the-fun

The series is a comedy in the vein of The Office meets The Dating Game.

Dateless is created by matchmaker Laura Bendixson who is also the executive producer (Facebook Link) https://www.facebook.com/HotSpotRadio Dateless is directed by Josh Hodgins

The team has some cool ideas and set a small and reasonable opening budget at 9,200 dollars for 4 initial episodes.  The creative team is in place with full support and TV time will be available upon completion. Dan's Movie Report supports this project, and I look forward to seeing the first episode.
Posted by Dan's Movie Report-Danny Templegod at 6:01:00 PM No comments: 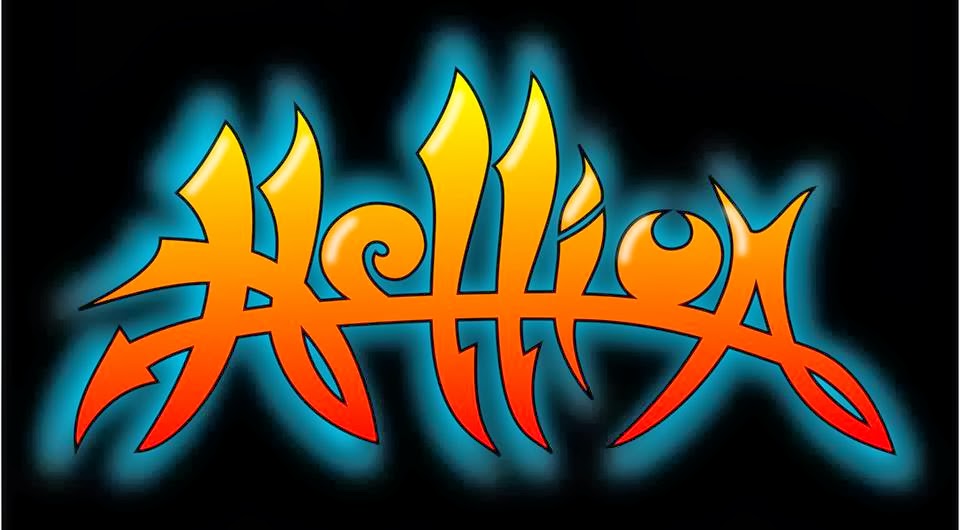 All the way back in the 80s, way, way back when I was a radio DJ and wrote for Zazz Magazine, I interviewed Ann Boleyn, and played Hellion all of the time. 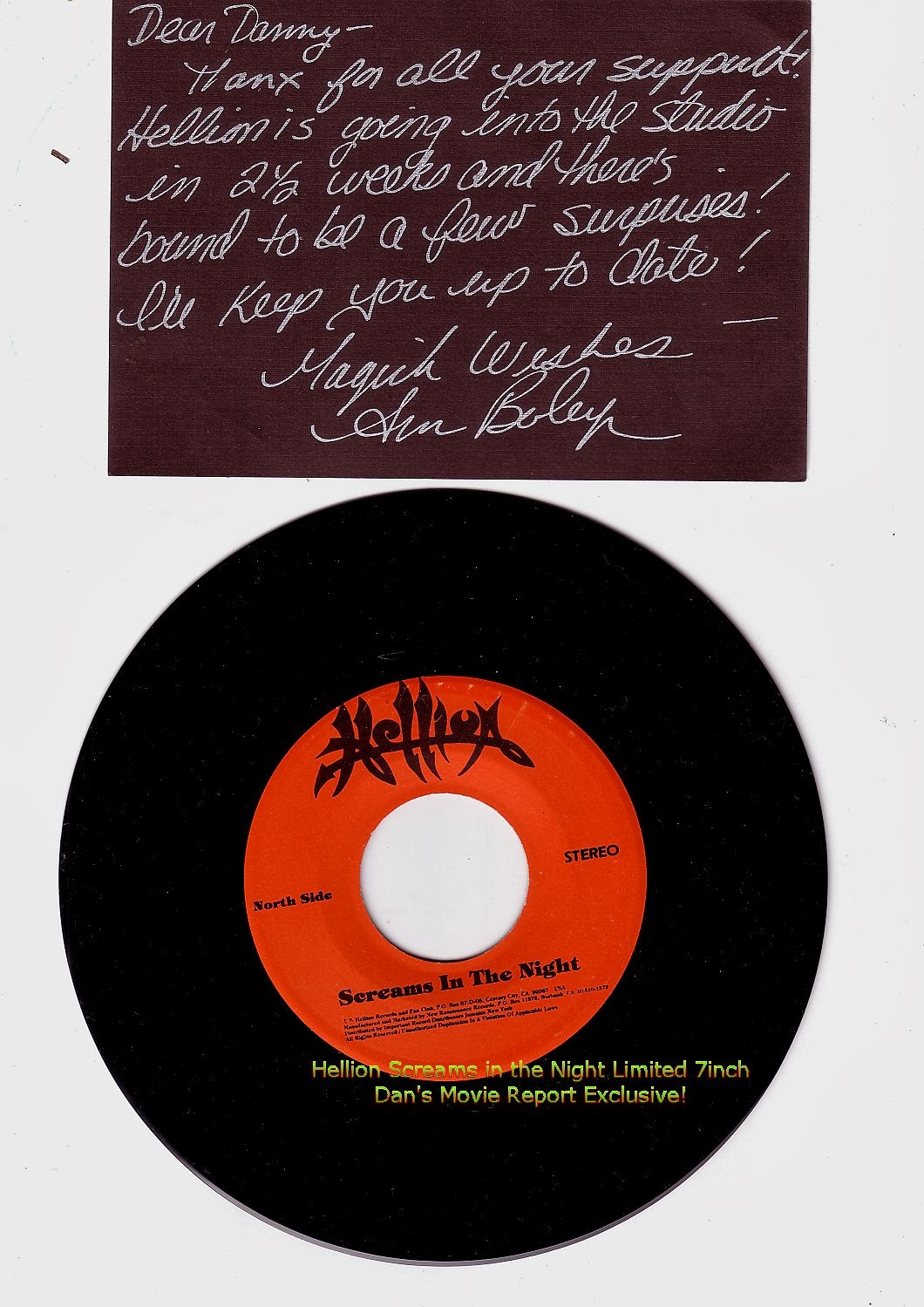 Click on above image for huge wallpaper sized photo! Exclusive limited edition 7 inch Screams In The Night! The single has never been played!

In fact, I am thanked on the "Screams in the Night" LP and was lucky enough to score several Hellion exclusives. The "Postcards From The Asylum" EP test pressing and Limited edition Screams in the night 7 inch have survived hurricane Andrew, and have come Up From The Depths! 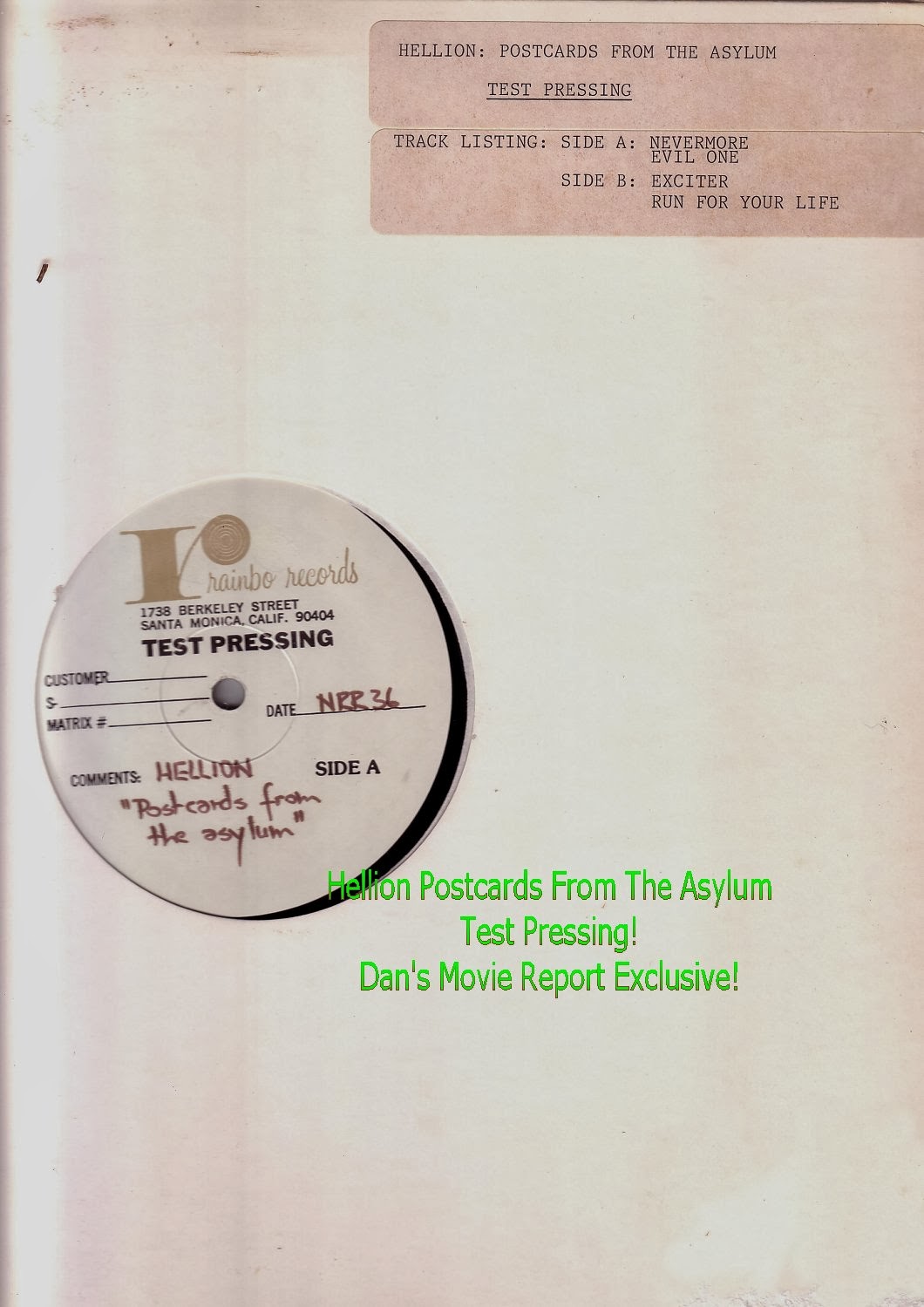 Here is the exclusive clear Vinyl Screams In The Night LP! Keep reading Dan's Movie Report for future interview and CD review of the new Hellion in 2014! Ann  Boleyn and Hellion are back and ready to unleash more rage and energy to the masses, it is time for Screams in the Night once more!

Like the band on Facebook for more info: https://www.facebook.com/Hellion.Official
Posted by Dan's Movie Report-Danny Templegod at 5:12:00 PM No comments: