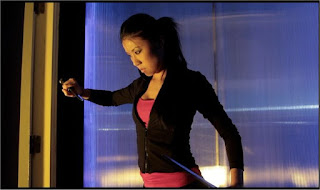 The above picture is sweet but dangerous Grave (Aoni Saiya Ma) preparing to slice and dice her way through the Radvics!


Movie producer/director Kantz is in production on the second installment of the Project Purgatory series entitled Project Purgatory Beijing. Kantz is an established person in the film industry and has several films out including Random Acts of Violence, Love and A Bullet and his most recent effort Urgency.

Project Purgatory Beijing is an action/horror flick revolving around radiation victims called Radvics who were infected with a virus causing them to be flesh eaters, who feed on the remaining population. This is a true Asian style film complete with copious amounts of blood and guts along with martial arts. For those interested in watching the first few minutes of the film if you dare, point your browsers to http://www.youtube.com/watch?v=Nf7_MExkspc

Kantz's Urgency tells a sordid story of betrayal and deceit, and stars Brian Austin Green and Jeffery Combs. The movie was just released on home DVD and is available at amazon as well as netflix http://www.amazon.com/Urgency-Brian-Austin-Green/dp/B004H0M2SW/ref=sr_1_1?ie=UTF8&qid=1301159218&sr=8-1
More news, set pics will follow...
Posted by Dan's Movie Report-Danny Templegod at 11:55:00 AM No comments: