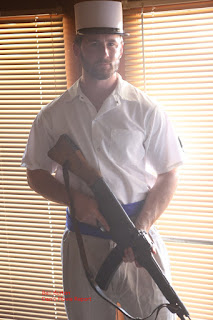 Ben Burton came to my attention with the great photos he took of actresses JuJu Chan and Sheena Chou for my interviews. Come to find out, Ben worked on Savage Dog in some of the action scenes and stand in scenes. Today I chat with Ben and get his thoughts on photography and his work on Savage Dog.


DMR: Chat about your childhood, and how you got interested in photography.


BB: I grew up in Harpersfield, Ohio, a rural area with lots of room to run around. My days were spent exploring the surrounding woods and galloping through vineyards atop my Arabian horse. My first interest in photography was from looking through old family photo albums, including some of my grandfather’s old photos. Something about it stood out to me—the idea that anyone could pick up a camera and do it.


DMR: What was the first camera you shot professionally on?


BB: As far as professionally, I went straight for the 5D Mark III. I spent a few years on small independent sets and I always bugged the production people to let me play with their cameras. It was my way of shopping. After all the cameras I held, the 5D was my clear choice. 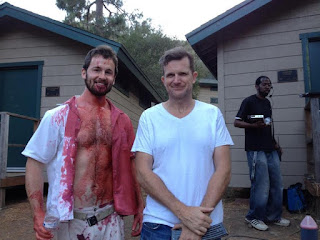 DMR: Chat about transitioning from film to digital cameras, some of the challenges.

BB: I only ever shot on film recreationally, so I was always laid back and just doing my own thing. When I started shooting professionally and switched to my Canon there were no big challenges. At first it was a little overwhelming getting a hang of the 5D, but once I did, it was smooth sailing.


DMR: What are some tips you have learned when shooting still shots for movies?


BB: Since it is a movie set and there is a lot going on, the biggest thing is to be aware of your surroundings. Know when to go in for the shot, and know when to step back. Always know where the director of photography and camera operators are.


DMR: How do you change your approach when shooting action as opposed to the more dramatic shots in films?


BB: I love to shoot action: it’s exciting and always different. To make sure I’m ready to adapt to whatever the situation is, I almost always have my 24-70 mm lens on and I’m prepared to move fast. Actors and stunt performers move around a lot, so the faster I can move the better, which means I need a fast shutter speed. A fast shutter speed is the key to a lot of good action shots.


DMR: For dramatic scenes it’s slower paced and there is time to move around, so I usually stick with a fixed lens and use the freedom to move in order to enhance the light the best I can to benefit the photo. 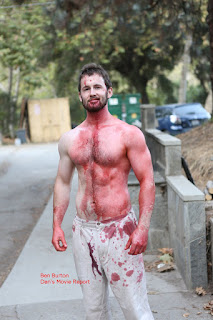 DMR: Chat a bit about working on “Savage Dog.” What were some of the highlights and perhaps unique challenges on the film?


BB: One big highlight was working with the great crew and actors. I had previously worked with the director, Jesse Johnson, and he asked that I be involved on this project. Meeting and working with Vladimir Kulich was a dream come true for me. “The 13th Warrior” has always been one of my favorite films, and to meet Buliwyf was very special.


Working with a team of such professional people makes behind-the-scenes photography a wonderful experience. Scott Adkins is a great leading man and a true pleasure to photograph.


As for challenges, some of the interior sets were small and had lots of crew packed into a small space. At one point I was actually tucked inside an old jukebox and shooting through the front pane of glass! It had no backing, so I pulled it about a foot away from the wall and crawled in.
We had a scene that was shot late at night with rain machines, so getting close enough to get good photos was tough. I remember holding a piece of plywood over my head with one hand and shooting with the other. The director, Jesse, actually stepped in and held the board for me on a few takes. Needless to say, both of us got wet feet!


DMR: What is your go-to camera when shooting on film sets now?

DMR: Do you enjoy working on film sets as opposed to portrait or standard photography shoots?


BB: Honestly, I love it all. I’d say the advantage that normal photo shoots have over being on set is that they are a lot faster, whereas movie sets are an all-day affair. However, if you’re working with awesome people like the crew on “Savage Dog,” the long hours aren’t an issue. I like film sets because of how different they are. Every day on set presents new challenges and I always have to switch it up to get the right shot.


DMR: Do you have a favorite type of film to work on? Do you like the action films more?


DMR: I know you said you did some of the stunts and action on “Savage Dog.” What are some of the things you did on set?


BB: I did, and I feel very fortunate to have been involved in that way. That was one thing Jesse and I talked about before production. He said he’d find a way to put me in there and he stuck to his word. From being blown up, shot, and sliced, I think I died three or four times in this film. (This is, of course, spoiler-free because I wasn’t a principal character.)


I body-doubled for Scott Adkins for a scene or two. That meant acting with Juju Chan, which was a great experience. I won’t give away more, but you can look forward to watching Scott take me down. Luke Lafontaine was Stunt Coordinator on the film and he really did an amazing job.


DMR: What are some of the projects you have upcoming in 2017?


BB: For stunt work, I will be putting my fire-breathing talents to use for a post-apocalyptic project that starts filming in March. That’s all I have lined up for now. You may run into me on sets, taking behind-the-scenes photos. I have a few things in the works.There are one or two acting projects coming up, as well, which I’m very excited about, but I can’t say anything at this point.

BB: Go take pictures! The best way to learn is to practice. Talk to and get to know other photographers to grow your network. If you’re working on set, don’t be afraid to get in there and do your job. Some people are nervous to approach actors or crew for photos, but you’ve got to remember you are part of the crew and everyone knows you are there and that you have a job to do! Above all, always have a good attitude.