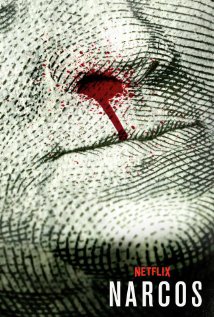 Above Photo credit: IMDB poster of Narcos. All screenshots are (C) 2015 Netflix. The Screens are for promotional use only for review purposes.

In all my four decades of TV viewing, I have never witnessed a show so detailed and focused about one character in history and the people he surrounds himself with, and crushingly realistic. 'Narcos' is a "tour of force", no pun intended, the first season comprises of 10 fifty minute episodes and it is so riveting it is hard to look away. 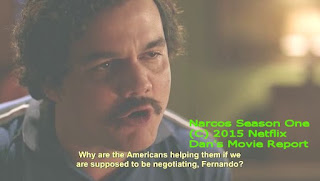 This is the world of Pablo Escobar, famous drug kingpin of the 80s and early 90s in Columbia. Netflix is to be commended for pulling out all the stops and actually filming the series in Columbia. The first season is not just centered around Escobar, but his entire outreach network of drug kingpin counterparts and the world they live in. Including actor Luis Guzmán as the crazy violent José Rodríguez Gacha. That guy is just scary and will not think twice about wiping out an entire bunch of people just to get one person he is looking for. Watch also for the M19 group of crazies. Actress Ana de la Reguera portrays Elisa Alvero, a woman on the edge of M19, a cool character, no spoilers!

The only way this could have been presented is in unadulterated, unabashed, brutal realism. This is the world of expensive tastes, over the top lifestyles and horrible atrocities, all in the name of greed, and power, and the shipment of drugs to the U.S,. This is a series meant for adults and, nothing is taboo, the sex, violence is over the top and paints the picture into the life of Escobar and his world.

Wagner Moura and his portrayal of Escobar has such a distinct and nuanced character. In the beginning he always wanted to make people happy and actually cared about the well being of people who worked for him. His descent to paranoia toward the end of season one is palpable, and the reasons being he was learning not to trust anyone. A hard role to play, he lives a dichotomous life, caring for his wife Tata,  Paulina Gaitan  and family. In business he was ruthless, and had to show his horrible side, trying to maintain control. Quite an amazing performance. 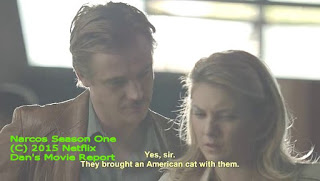 Chasing after him are two DEA agents, with the reluctant help of the US government. Boyd Holbrook as Steve Murphy, tells the tale from a 'Gringo's' point of view with short narrative dialogue. His beautiful wife Connie, (Joanna Christie) is like a duck caught in the crossfire, as she has to live with him in Columbia, chasing Escobar. Pedro Pascal as Javier uses some really unscrupulous means to get information, salacious and violent, his motto seems to be "By any means necessary!" 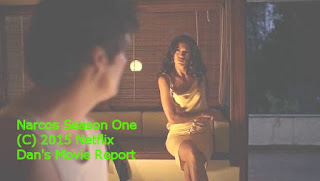 Being a writer, I have to give special mention to the amazing portrayal of Valeria Valez by Stephanie Sigman. She was always looking for an angle with Escobar. She needed to fuel her desire for exclusive stories by making sure she was first on the scene. Valeria, was a sexy vixen and she used her womenly wiles to make Escobar tell her the story, and in return she painted him in a postive light. She has a fued with another journalist, but that story I will not spoil. Stephanie is a really great actress, and makes the audience hate her as she is so sleazy in the show, but trust me, you will feel sorry for her character's pathetic life towards the end of season one. 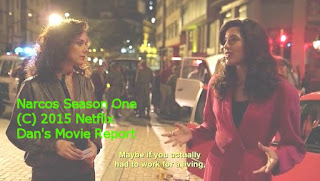 Everything about 'Narcos' is top notch, the scenery, writing, editing, tie ins to actual events, and character emotion. This is a documentary style series with the some of the names changed. Perhaps this is one of the fantastic ways to tell a detailed story, by expanding it to a series. Netflix gets it right. They do not have to bend to the will of advertisers, as their subscribers drive content. Be prepared to brush up on your bad language Spanish with 'Narcos', but seriously this is a subtitled show, so even a Gringo like me can enjoy. Haha, All I can say is I am so excited for season two! Watch for more exclusive 'Narcos' material in 2016 on Dan's Movie Report, your #1 home for independent exclusive content on the web!

Overall, I recommend a binge watch of 'Narcos' at least a couple of times. 'Narcos' rates a 9.5 out of 10. Narcos is that good. The show blows away the rest of the competition, literally. 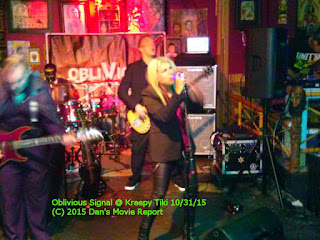 Greetings fellow movie lovers, Ok I know what you are thinking hey, this is a movie site, well, occasionally I do blast out some music coverage!

The stage was set for a great Halloween show sponserd by The O.M.E.N. Productions http://www.theomen.net/  Oblivious Signal https://www.facebook.com/ObliviousSignalMusic/?fref=ts
was the headliner.  2 support bands RMNTX and Naked Vengeance rocked, at the show which required a mask to get in!

Below is a photo of Oblivious Signal at their merch booth! 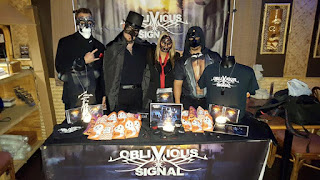 This was Halloween of the finest order; Good crowd, friendly staff at Kreepy Tiki, and bands played in a timely matter, with decent sound. The idea of making people have at least a mask on to enter was fun. Yes, this old man played along! Below is me, my buddy and Christina (middle), all mugging for the camera! 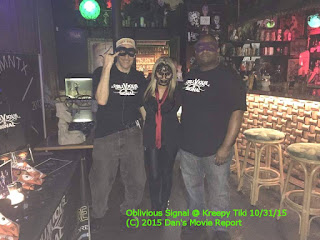 Some highlights of the Kreepy Tiki show were a massive 8 minute cover of Master Of Puppets, and the sheer amount of crazy costumes, including a guy dressed as Bob Ross (the painter from PBS with the afro). Oblivious Signal headlined and lead vocalist Christina made the fans come close and crowd near the stage to enjoy their blend of rock. A final hysterical highlight was Christina, daring a young man to take his shirt off and him obliging, like I said this was a wild show!

For more information where Oblivious Signal plays next, and to buy their music and Merch go to http://www.oblivioussignal.com/
Posted by Dan's Movie Report-Danny Templegod at 10:36:00 PM No comments: