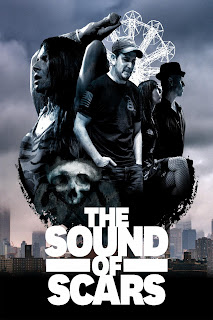 Above: Promotional poster for The Sound of Scars-- (C) 2022 All rights reserved, image not monetized.

Greetings valued Dan's Movie Report readers. Across my desk today comes a very important, sadly dark, yet moving documentary about the band Life of Agony. The film documents the early life and decidedly somber transformation of Mina Caputo. Born as Keith, Mina really had a difficult childhood, filled with abuse, drugs, the loss of her mother, among other things.

Director Leigh Brooks, brings this all encompassing band story to light, allowing the entire band to have a back story and often tell their experiences about Mina and their own childhood, growing up in Brooklyn.The director allows the story to unfold, yet curates the story to keep the band members focused on the details keeping the story cohesive.

The way the story unfolds is an amalgamation of early life photos and stories, interspersed with a variety of videos from various stages of the band's 30 plus year career. Interestingly a story of them being roadies for Biohazard, really hit home. They pointed out as well how the scene was segregated, skin heads, Nazi Skinheads, Metal-heads, and Hardcore Fans. As a writer of indie music mags Zazz and Jam during the time of Life Of Agony's heyday, I would observe this at many shows, fights would break out etc. The band recall the so called rules and practices of the mosh pit. Pick someone up if they are cool, if they are an assh#$$e then stomp on them. They spoke about playing at and seeing bands at L'Amour and CBGBs two very important clubs in the scene in the late 80s early 90s.

Mina comes arose as a far different person, yet more at peace with who she is at this point in her life. Losing a mother at such a young age is very hard. Mina is shown relaxing on the couch in present day seemingly well adjusted with a small dog, a far different person than the same angst ridden singer of 30 years ago.

This is an important film as it shows the intrinsic struggle, a band goes through, yet remaining friends all of these years. Parents of some of the band members are shown, adding a sense of family to the film. As a fan of a band, people often have no idea the life and struggles many bands face outside of the hour or two they spend on stage at night.

All behind the scenes aspects of 'The Sound of Scars' are impressive, solid music obviously, well lit scenes of talking and life outside of the stage, in addition to some well curated past material. A 90 minute runtime seems perfect as it tells the story without getting bogged down in fluff or repeating. It never comes across as preachy or sending a social message, more like an account of their lives, thus allowing the viewer to make up their own mind.

A few years ago Life of Agony introduced a cool new drummer to the fold, Veronica Bellino in 2018 replaced longtime drummer Sal Abruscato who amicably split with the band in 2018. Sal also played in Type O' Negative in the early days! Bellino is really talented and diverse, playing with so many artists including Jeff Beck, Richie Sambora and LlcoolJ. Bellino is shown in the documentary and I want to know more about her life as well, that said most of the documentary focuses on the past material.

Overall, 'The Sound of Scars' is damn amazing, jump off the stage into your living room drama, perhaps one of the best documentary musical films I have seen in recent memory, rating a powerful 9.5 out of 10, it is that good, a must own!

("A lifetime's worth of struggle and triumph led to the making of this film.” says guitarist Joey Zampella. “Life of Agony has been our link to people who are just like us... And no, the world gets to see the inner workings of what makes us who we are. This release is something we'll be forever proud of." ) The film is available now on various streaming outlets.

Order The Sound of Scars on Amazon

Order The Sound of Scars on iTunes

Keep reading for more information on The Sound of Scars' later in 2022 on Dan's Movie Report!

Posted by Dan's Movie Report-Danny Templegod at 10:36:00 AM No comments: