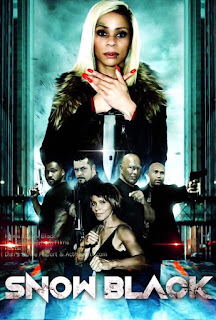 Above: Snow Black Poster (C) 2020 Meyham Films and Maverick Entertainment, all other photos are courtesy Robert Parham and for promotional use only.

Greetings valued Dan's Movie Report and Action-flix.com readers! Producer Robert Parham has notified me that his latest film 'Snow Black will come out on Maverick Entertainment on January 21st, 2021!

Above: Sarah Buckner as Sarah Camden in 'Snow Black', kicking ass in a sexy top!

Dan's Movie Report and Action-Flix.com will have exclusive coverage starting in late 2020 and on into 2021! In the mean time please check out the review of the film @ https://action-flix.com/2020/04/05/dans-movie-report-review-spec-ops-action-erupts-in-the-new-indie-thriller-snow-black/

Above: Gloria Hendry in 'Snow Black'

Posted by Dan's Movie Report-Danny Templegod at 5:15:00 PM No comments: 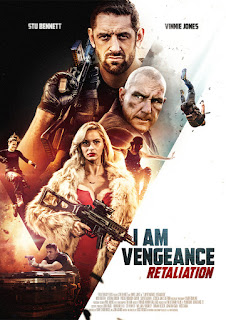 Above: I Am Vengeance: Retaliation poster (C) 2020 Evolutionary Films, All rights reserved not monetized. Below: trailer from Evolutionary films (C) 2020

Greetings valued Dan's Movie Report readers, across my desk today comes the long anticipated action film 'I am Vengeance: Retaliation'. I must admit the film has been on my radar for awhile and I have a pending interview with actress Katrina Durden as well. To be honest, after watching the film, I was unsure if I wanted to review, yet feel compelled to do so.

Director/Writer Ross Boyask assembles an action film that promises more than the first installment, yet sadly fails to deliver on almost all fronts. Yes there is wall to wall action and fight sequences, expertly choreographed by Tim Man, and a really great action performance by Katrina Durden, yet the film feels hollow. At 82 minutes including credits crawl, there is no story line and the only plot is basically trying to take an ex military man to justice played by Vinnie Jones. Sean Teague (Jones) apparently killed his entire team and also the father of Jen Quaid, played by Katrina Durden. In 'I Am Vengeance: Retaliation you have two groups of competing mercenaries each trying to take the other out, yet oddly manages to take the time to drop fully loaded weapons to engage in hand to hand, or foot to mouth combat. Katrina's Jen Quaid has no desire to see Sean Teague brought to justice only to the morgue, and trust me she has unloaded an entire stockroom of whoop-ass on various thugs, I mean, I need a beating, I am calling Katrina!

The 19 fight scenes aside, the singular location and very modest use of scenery made the second installment of 'Vengeance' feel claustrophobic. I wanted to see more chases, and some real dialogue. Just not enough to keep up the interest. A short action film can be excused for not delving into a detailed plot or story as what you are selling is a proof of concept. 'I am Vengeance: retaliation feels like a proof of concept short stretched to 80 minutes. Yes the action s really great, some of the fights are pretty amazing, but ultimately the film itself is a rather disappointing outing. Just not enough emphasis on story.

The film was shot in the U.K., yet is released first in the USA, I am assuming the audience is a DTV market low budget fan, 99 percent male and mostly 15 to 30 yrs old. A couple good things, is 'I am Vengeance” Retaliation' hits the mark and should do modestly well in the niche it has carved out. Stu Bennett is a solid action guy, and with the dearth of ex-wrestlers in action films should have no problems getting in on some bigger productions in the coming years. Actually that is a market for this film, wrestling fans.

Some bright spots on the film are the power and finesse of Katrina Durden and the guile and tact of Phoebe Robinson-Galvin as Kate Lynch. The ladies have a copious amount of action and are very adept at handling it. Phoebe is more of a girl next door type, yet she is surprisingly agile and not afraid to fight. Katrina Durden has a breakout role and should most definitely be a lead in a new film with a better script and larger budget. Katrina wears some skin tight leather and she still moves like a black panther when she fights, damn impressive. The film is pretty well lit and the filming itself is great for the action, the audience can see what is going on. I like the fact that many times a fight would happen and the camera would pull back just in time for a character to do a big move or finishing hit.

Overall, 'I Am Vengeance: retaliation' is kind of disappointing, I wanted more, and I liked the first film better.  Not liking to compare, but Jesse V. Johnson's two 'Debt Collector' films have  far better plots, all the while not really sacrificing action. Ross is a good director, but I feel that a second script writer would have helped him add some meaningful dialogue and story for the characters, I wanted to see more character interplay, not just small talk between fights. 'I Am Vengeance: Retaliation' rates a very average 5 out of 10, a possible rent if you are into low budget action.

Film is available now in the USA to rent or own, watch for other dates soon.
Posted by Dan's Movie Report-Danny Templegod at 2:18:00 PM No comments: 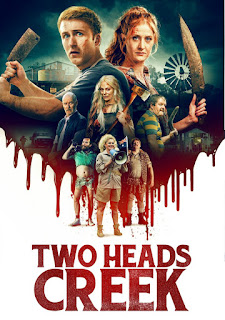 Above Photo: Poster for Two Heads Creek, (c) 2020 The Horror Collective, all rights reserved used for promotional purposes only not monetized.

A timid butcher and his drama-queen twin sister adventure to Australia in search of their birth mother, but the seemingly tolerant townsfolk are hiding a dark, meaty secret.

For further information go to:  http://thehorrorcollective.com/films/two-heads-creek/
Posted by Dan's Movie Report-Danny Templegod at 4:14:00 PM No comments: