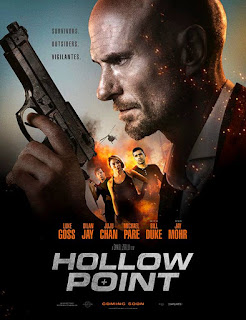 Posted by Dan's Movie Report-Danny Templegod at 11:29:00 PM No comments: 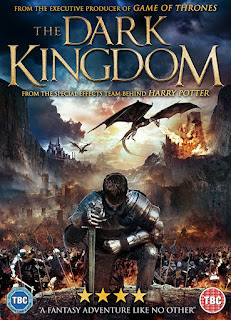 Greetings valued Dan's Movie Report readers. Hope all of you are having an amazing holiday season. Literally out of left field comes the second film in the Knights of the Damned series. Producer/Director/Writer/Actor Ben Loyd Holmes wore so many hats on this film that he deserves a medal for rescuing this film from the abyss. Usually the companies releasing the films push out screeners, press releases, promos etc... Sadly this never happened for Dragon Kingdom.

Distribution issues aside, Dragon Kingdom represents a huge step forward from Knights of the Damned. Bigger scope, better lighting, more engaging story, and the best part, copious action. Again, Dark Kingdom this is an ultra low budget film, thus I rate it in a comparison to films with similar budgets.

Dragon Kingdom opens with a village basically wiped out due to “Furies”, a race of people like zombies yet they are high functioning, and move fast. They fight berserk style with no real method. The small group of Knights assist the Princess of the town to evacuate to the nearest castle. Of course in her possession is some dragon egg, which the dragon comes to retrieve, yeah this film has everything. Incidentally, the VFX are decent for a micro-budget film and do not detract from the story.

Interestingly enough, not every creature the group encounters on their quest through the Dark Kingdom is malicious by nature, sometimes a softer approach is needed hah, no spoilers. The film essentially is a quest, yet the path is the find, so many creatures including one who is a mixture of a cyclops. ram, bear, and human.

Wait, I know what my readers are thinking, what is the focus on Dragon Kingdom, HA the focus is action and that is where the film really shines. Their are a band of crazy female warriors, a Dark Kingdom ruler, and some more mythical beasts to vanquish. Just about every weapon is used and Zara Phythian has a pretty bad ass fight near the end, Ben vanquishes his shirt as for his fight toward the end with the lugubrious, and loquacious Dark Kingdom ruler.

Ben and Zara are stepping up their acting game in Dark Kingdom. Actually the acting is decent from all of the principal performers. Rebecca Dyson-Smith as princess Elizabeth undergoes a transformation, from delicate flower, to somewhat of a more forceful leader, and she shows the proper emotion for her character development throughout the film.

I have a few small complaints: one is the somewhat lack of urgency to leave the original village, and rather methodical movement through the Dark Kingdom. The second complaint is that some of the fight scenes are filmed to close to the performers. The final complaint is a mild spoiler, a character who can shoot arrows with accuracy is taken early on in the quest and is like just gone, and kind of written out of the story. I feel that her character would have offered an interesting dynamic later on in the film. Ben provided me with insight, on why this happened, understandable, but a bit dissapointing.

Quips aside, Dragon Kingdom is pretty entertaining, nah it is not a deep story, but some clever monsters, and action, coupled with a tight running time of under 86 minutes including credits crawl, is def worth a watch. For the issues this film had with distribution and woeful lack of promotion, it deserves to be more widely seen. Dragon Kingdom rates a 7 out of 10.

Watch for new interviews with Ben Loyd-Holmes and Zara Phythian in 2019!
Posted by Dan's Movie Report-Danny Templegod at 1:29:00 AM 1 comment: