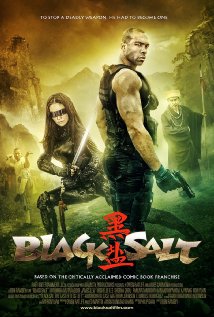 
'Black Salt' proves the power of Indiegogo and the short film. Producer Owen Ratliff and Director Ben Ramsey ('Blood and Bone') bring the full force action short 'Black Salt' to the festival circuit after a successful crowdfunding and marketing campaign. The screenplay written by Philip Daay features Kinyumba Mutakabbir as Samuel Lincoln Tharpe, a man searching for answers. He was raised in Asia and has to return to locate this WMD called The Exterminatus.

Skirting the line between drama and action the 30 minute short forms a solid stepping off point to a story which can progress in any number of directions. As a short film 'Black Salt' is a table setter, there is enough action and story to begin a series on cable or broadcast TV. As a series of films, 'Black Salt' could follow the back story of the various characters, and flesh out some of the secondary characters and how they intersect with the WMD. 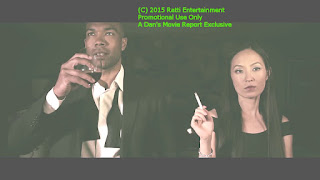 Many mysterious characters permeate 'Black Salt'. Sultry Sheena Chou plays Li Jing. Her character has informational map tattooed on her back detailing the Exterminatus, location and how to activate it. Li Jing is shrouded in mystery and the audience is never given a chance to learn more about the 'sect' she mentions she would be betraying if she divulged the information. Action actress and all around adorable bad-ass Michelle Lee plays Horse Ripper. Apparently her character lives in the ether, a realm cloaked in shadows. In 'Black Salt' Michelle's character, fights with Tharpe, but it is an enigma, an internal mental fight.

The action in 'Black Salt' is creative, each fight is a tightly choreographed ballet of punches and kicks. Some fights use weapons, and obviously each fight is tailored to the skill of the actors involved. The fight Michelle has with Kinyumba at the end is not only entertaining to watch, it is creatively filmed, artistically lit, and has perhaps the coolest theme song playing in the background "When the World is Blind" an original tune written for the film. 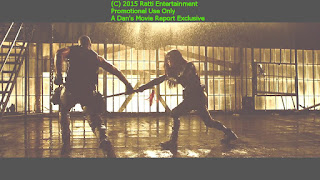 
The film ends in mystery, leaving the viewer wanting more. Fresh off the "Black Salt' win at 'Urban Action Showcase' in NYC, watch for more from the cast and crew of "Black Salt'. In a recent phone conversation with Owen, he told me some of the creative ideas he has for a feature film and how he wants to market the film. 'Black Salt' director Ben Ramsey knows how to direct an action feature and just released his director's cut of 'Blood and Bone'. His direction on 'Black Salt' is tight , but never heavy handed, he lets the events unfold and the viewer maintain engagement throughout.

'Black Salt' represents the proper way to market a short film and tie in all aspects of marketing, Owen is a master marketer, he knows how to keep the audience wanting more. With a comic book tie in, clothing line, and over 35,000 FB likes 'Black Salt' is positioned for a monetary jolt from a network.

Overall this is a great stepping off point for all involved, I am actually curious how a big budget 'Black Salt' feature film would be received nationally. The superhero interest seems to be at an all time high, and the lack of new action heroes is actually quite staggering. "Black Salt' is a modern hero, steeped in the past tradition, and should play well with teens and adults who enjoy the comic genre. 'Black Salt is the culmination more than a half decade of hard work from creator Owen, and his team, and rates a 9 out of 10, my top short film of 2015.

For more information on 'Black Salt' check out the official Facebook Page @  https://www.facebook.com/blacksaltthemovie/?fref=ts
For the official site kick your browsers to: http://blacksaltfilm.com/