Watch Dan's Movie Report for an upcoming interview with martial artist/actress Zara Phythian. Ms Phythian chats about her martial arts background, and her upcoming role in the UK horror film The Hike, which invades home video in the UK October 24th.

Below is a screen capture from the trailer of The Hike: 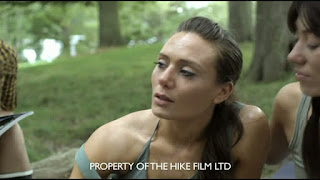 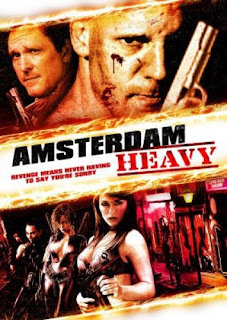 As a fan of Michael Madsen's acting style I was drawn to this film for what looked like a good crime drama with a good dose of action thrown in. Truth be told Mr Madsen was not in this film for more than three minutes, but Amsterdam Heavy delivers the action in an unusual and non subtle way.

As the film opens and we see the lead character JD (played with underlying intensity by Rik Sinkeld) breaking out of a shipping container with the label Amsterdam Heavy on it. He has been drugged, shirtless, and only has small shards of his memory. As the movie progresses JD meets a couple of street thugs, he dispatches them, and now he has his clothes and is ready to roll.

He has a number scrawled on his arm with a shard of glass, He dials the number, and viola we meet the heroine of the film Monique Lander. She is portrayed with salacious enthusiasm by actress Alison Carroll. Although Alison has little film experience, she is a pretty good actress, clear speaking voice, is adorable, and makes Amsterdam Heavy a fun film to watch. Monique is an undercover cop, who happens to be working at the strip club of the bad guy they are after.

Monique fills JD in on his life, who he is, who she is. JD learns he has a family, and not only does he have to find them, he has to get after the people who are after him, and the corrupt department he works for. Alison is definitely the acting highlight of Amsterdam Heavy, hopefully she will get more roles.

Above Screen Capture: Alison Carroll as Monique in Amsterdam Heavy

Amsterdam Heavy has lots of action, fighting and gun play. Some of it believable, some of it ridiculous, especially when JD gets his clock cleaned by two rail thin fighting girl thugs. Topping things off, after finishing him, one of them slings him over her shoulder like a two pound sack of potatoes. Alison's character Monique does look like she can kick some ass however, and to no surprise we witness her rough behavior as well.

Unfortunately much of the other acting is not so good, but Amsterdam Heavy has enough action and scantily clad ladies to give this film a recommend watch.
I rate Amsterdam Heavy a 6 out of 10, a definite rent or Netflix stream.
Posted by Dan's Movie Report-Danny Templegod at 9:09:00 PM 4 comments: 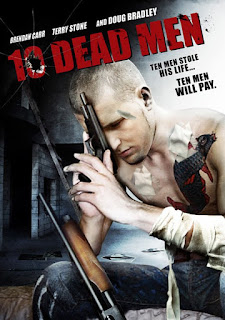 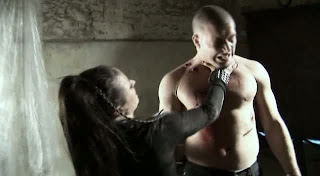