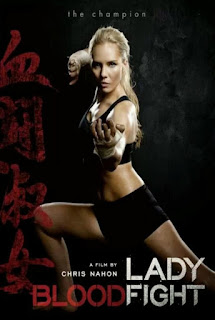 Languishing in a mired past, Bey Logan's Lady Bloodfight was initially supposed to be a low budget project shot in HK with Hong Kong actresses and a smaller scope with more grit. Voltage pictures entered and brought in the amazing Amy Johnston, merging an East meets West style. Amy plays a character named Jane who has a checkered past and a rather lazy slothful, mother who smokes to much. Jane tasks herself to search for her father who disappeared long ago in the same tournament. Not a bad set up, yet seems too basic.

Lady Bloodfight has far to little dialogue to keep any semblance of a story flowing, that said the captivating Muriel Hoffmann is a real Misses Myiagi and teaches the often uncouth Jane to fight. Speaking of fights, there are many of them, some are far better than others. The fighting is obviously the main focus, the issue I had is the tone is too light and not gritty. These ladies are supposedly beating each other to a pulp yet some smiles and bright lights made me feel this was a comedy. Best fight was Jet Vs Mayling their characters really mixed it up! Mayling Ng is a real powerhouse and cannot wait until she unleashes hell as Orana in Wonder Woman watch for new interview soon!

The main issue with Lady Bloodfight is lack of secondary character development at all, and even a really cool character like Mayling Ng's Svetta is lost in the background. Jet Tranter is shown a bit more and is beating a guy in arm wrestling early on. Jet seems constantly happy in Lady Bloodfight, not scared until well, not gonna spoil it. The other roles, including an absolutely gorgeous Rosemary Vandenbroucke are background fodder and never amount to anything.

The two leads, Amy Johnston as Jane and Jenny Wu as Ling are amazing. Jenny is a bundle of snarls and ample cleavage, hey now, Jenny sorry! Seriously though Amy is great and gives the movie some needed heart in a diner scene. Jenny is really a treat to watch as she is sucking on her lolly, I mean not a care in the world except to kick some ass, where does the line begin, ah yes behind me?

The glaring obvious point is the shaky came and very questionable angles with the fight sequences filming, is it that hard to hold a camera still? I like Chris Nahon as a director, but not on this film as much, perhaps needed a good HK action director and  a cinematographer who understands action with the ladies like perhaps Carmen Cabana. Overall Lady Bloodfight is worth a rent and rates a 6 out of 10 decent. Jenny Wu, Ms Hoffman, and Amy carry the film and make it worthwhile.

Please check out the exclusive Shout out video @
Posted by Dan's Movie Report-Danny Templegod at 4:57:00 PM No comments: