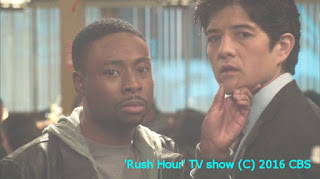 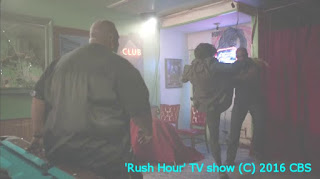 FB page for the show is @ https://www.facebook.com/RushHourCBS/?fref=ts
Posted by Dan's Movie Report-Danny Templegod at 4:59:00 PM 1 comment: 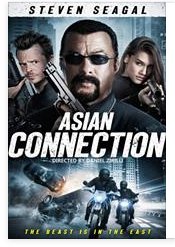 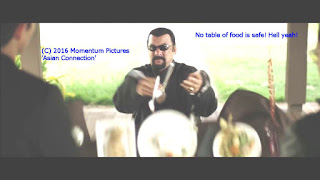 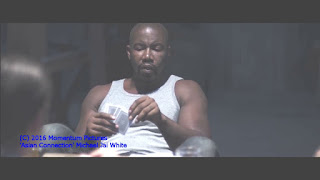 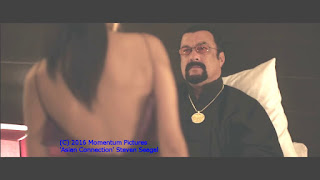 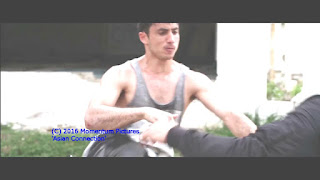 
Posted by Dan's Movie Report-Danny Templegod at 2:16:00 PM No comments: 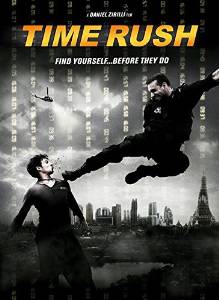 Above DVD cover and poster for 'Time Rush'

Fast forward to 2016 and from Archstone Distrubution comes a name change and the DVD of 'Time Rush'. The Daniel Zirilli directed film created and produced by Dean Alexandrou follows the time paradox loop story of Alex, who witnesses a murder, and has to put the pieces of his memory back together. Remember kids, this film was conceived prior too 'Edge of Tomorrow' and although Time Rush is a memory loop concept, the quest he is after is not to win a battle it is to understand his own life. Alex lives his life through a watch, with a starting off point of 30 minute countdown, and the film then skips around to the distinct fragmentation point he needs to unlock the secret to his life and mysterious love Jane, played by Selina Lo. Selina helps him complete the puzzle in a non linear fashion, all the while being chased by the tentacles of the mysterious Prevara Cooperation and Lead Captain of the guard Ron Smoorenburg. The jumping off point in 'Time Rush' is the murder of his friend Brink, played by action expert Byron Gibson, the film reverts back to his shooting, as a beginning to the time loop, 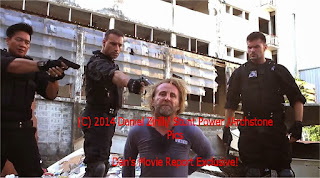 
Whew! 'Time Rush' is an indie film that forces the viewers to pay attention as the flashbacks to previous points in time occur. The world of Alex is crashed back with a figurative death to 6 months, 1 month and several other places in time, to learn what will happen and anticipate the moves of his enemies in battle. This brings me to the true highlights of the film the action sequences. Dean, Ron, Selina, and the entire Jaika stunt team, coupled with the excellent direction and principle photography of Daniel Zirillis's team create action so up close and clear, we can see the expressions of the fighters. With Dean, Ron and Selina, and the Jaika team, you have true trained action people, The fights are crisp, falls are hard, and there are consequences.Make no bones about it, there are sci-fi elements in 'Time Rush' but it is: "All about that action boss" haha! 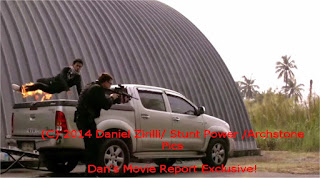 
Starting with Dean, combining his masterful parkour with martial arts, his movements force the viewers to be engaged where he is going next, what battles he picks, what battles he runs away from. Ron Smoorenburg combines raw power with hard energy, the intense anger, he shows as the lead antagonist is refreshing, He wants to return Alex to the Prevara headquarters.

Sultry Selina Lo, powers through a diverse character range from sweetheart to kick ass brutality. Selina relishes the action, and the respect for Dean in real life shines through in 'Time Rush'. Jane is Dean's moral compass, a quiet waitress by day, Selina's character evolves and begins to show Alex the path to follow to find the truth, putting her life on the line, and fighting off a few baddies along the way. She has my favorite fun line in the film when approached by two smarmy guys making comments like where are you going my house is that way and generally getting in her face. She proceeds to kick their ass and say's prior "Save your breath for your blow-up doll". Actually the movie plays pretty serious, but a few moments of humor lighten the tone.

A quieter time in the life of Jane (Selina Lo) Ok stop drooling, Selina may be sexy but is far from harmless!


A minor gripe, obviously with budget constraints, is the ADR, and at times the character's voices seemed unnatural. This aspect can also be explained as much of the film was outside, and in order to limit the background noise of for example the Train Market in Thailand, and some of the U.K. scenes the post production had to eq the sound. The voices were equalized and at times do not match the character's state of exhaustion etc. Seriously though it is not a major detraction, as the story is engaging, and the action is so furious.

As stated before, when 'Time Rush' shines is the creativity and clarity of the action sequences. The audience does not have to set the brightness to maximum on their device. Yeah! We see the fights, falls, bruises, and flaming leg kicks! With homage to several other action movies as in the bullet dodge from 'The Matrix' 'Time Rush' adds enough originality and urgency to keep the viewer fully occupied through the tight 82 minute run time.The inventive musical score added to the urgency of the 'Time Rush'. Special shout out to Nicholas Rivera, for his musical genius, to keep the film flowing like an avalanche!

Nah, not going to spoil the outcome, look for a cool cameo from the talented Zom Ammara who plays a pretty important part near the end as a taxi driver, and gets to use the word asshole haha. Kudos to eveyone involved, my slogan for 'Time Rush' is "Live, Die, Run, fight, repeat" I can safely say this is a must own for action fans and time paradox fans alike. 'Time Rush' rates a 7.5 out of 10. A fun film on a minuscule budget, made by passionate people.

Please check out all of my interviews from the cast on the following links:

Selina's and Zom's were done prior to filming, but they are detailed and provide background on them"

Posted by Dan's Movie Report-Danny Templegod at 2:12:00 PM No comments: