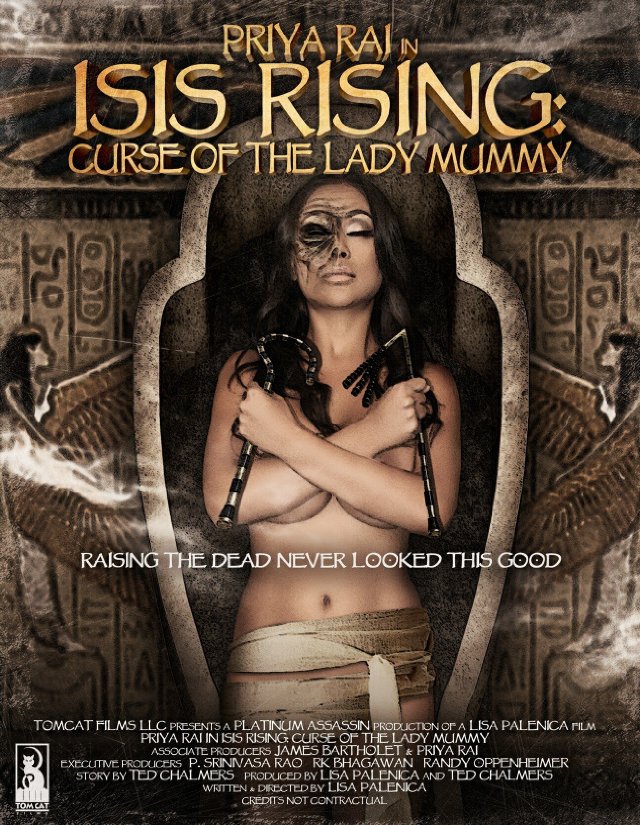 Crossing over into her first "mainstream" film, popular, exotic, adult movie star Priya Rai tries to expand her fan base and explore new horizons in Isis Rising. Priya's adult films often include a few moments of  "scene scenario" acting. For research purposes, of course I sampled a few of them prior to this review, ok many, whatever haha.

Isis Rising's opening sequence almost mirrors the first 'Mummy' film, where a ultra sexy Patricia Velazquez, gets caught up in a love triangle that ends up in murder. Most of the rest of the movie takes place in the present day, in a museum, with the contents of the tomb being explored, by a handful of students and a professor.

Priya portrays the lead character Isis, although, Isis appears as a ghost, and breathes spirit breath into various students, forcing them, by spell, to collect body parts to raise Osiris, her ancient, murdered lover. Actually Ms Rai has kind of a smaller role then I anticipated, especially given top billing. She only appears for brief moments scattered throughout 'Isis Rising', which focuses on the students in the museum, deciphering the ancient artifacts. Priya fits the description of the salacious title character Isis, she is beautiful, and has a devious smile.

The acting in 'Isis Rising' is typical B-movie, a bit more overly dramatic than necessary. Supposedly the film is supposed to be a somewhat of a horror-comedy, maybe it was intentional, or perhaps just due to inexperience with the young cast. None of the performances detracted from the film, in fact reading trough the credits, Lisa Palenica takes on a quadruple role in the production of Isis Rising. Palencia, wrote, directed, starred, and is a producer on the project, a daunting task to be sure.

Sadly though, the film is rather predictable, the plot follows too closely to 'The Mummy', and several other films in the 'raised from the dead genre'. The special effects, definitively due to budget limitations, distract from the story, and perhaps it even would have been better to have more of the effects laden scenes to be implied, happening off-screen.

Overall, I know the cast and crew of 'Isis Rising' tried hard, it is excruciatingly difficult to make a feature film on a shoestring budget, with an inexperienced cast and crew. I give the film a 5 out of 10, a rent for B movie fans. Also check out the Tomcat films website, the seem to have a myriad of films in various stages of production, in several genres @ http://tomcatfilmsllc.com/