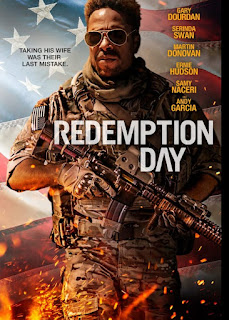 Even at 99 minutes, 'Redemption Day' tells a detailed story, and we learn a bit about the history of Gary Dourdan character Brad Paxton and his wife Kate Paxton portrayed by Serinda Swan . Brad is a former marine who has nightmares of the war in the Middle East constantly haunting him and Kate is an archaeologist and lecturer who is excited to go on a dig in Morocco, yet the dig is very close to the Algerian border.

At first I was curious why they strayed off and ended up going over to the Algerian side, but after researching, often archaeological finds cross current boarders and are unmarked to prevent theft. Also of note is the location used, while may be fictional, the truth is the Moroccan and Algerian governments often do not see eye to eye how to handle these situations. While being a fictional plot, in all reality, sadly at least prior to the pandemic, like 75 percent of what occurs in 'Redemption Day' seems highly plausible. I mean after all it is a movie and I leave it to the viewer to decide, but I recommend doing an archaeological search for Moroccan ancient ruins.

Without spoiling too much of the plot, Kate and her small group are taken hostage, but the captors want money for her. The captors are Isis inspired, but are looking for credibility in the terrorist ranks. What the director does right here is he shows the hierarchy and importance of prayer in their society. A good amount of time was spent developing the enemy, their motives, resolve, and aggression.

Highlights for me in 'Redemption Day' are the tremendous acting of 'Serinda Swan' showing a vulnerable side, her acting and honesty made her character come to light. I mean she took abuse, and yet managed to keep it somewhat together. The second highlight is Gary Dourdan, who I remember from CSI. He did a great job in the intense role and while showing love to Serinda Swan. Andy Garcia is amazing as usual as Ambassador Williams, in a role that suits his personality! No Spoilers!

My minor gripes are lighting in the terrorist compound, yes I know it is supposed to be dim and quiet, but I really had to turn the brightness up on my screen to watch some of the action., especially towards the end. I also thought it was weird that (minor spoiler) no one was monitoring the perimeter of the terrorist compound, not like just right outside. Also (minor spoiler) was a bit miffed that very early on a expedition guide was killed, n as it happens very early, but I think if she had survived, there would have been a balance of four hostages two men and two women. I am assuming this was done though to spotlight Serinda Swan's character, as she was the main focus of their attention, thus being a fan of Serinda maybe I need to keep my mouth shut, haha!

The action is excellent, we see a variety of things inducing a war simulation that is part of his re-occurring nightmare, and several scenes of gun-play and hand to hand fighting. The mix was not over the top, no Michael Bay explosions, more realistic, which is a nice touch. Kudos to the entire music and composition team, the score ebbed and flowed with epicness, tense in the right moments, yet building to a massive crescendo during the action.

Overall, 'Redemption Day' is a blast of energy and angst, worthy of a re-watch, and to own, rating a strong 8 out of 10. Serinda Swan is an amazing actress, full of heart, intellect and talent, I really enjoyed her character, and the emotions.

'Redemption Day' is available in Select Theaters January 8th and On Digital and On Demand January 12th from Saban Films.