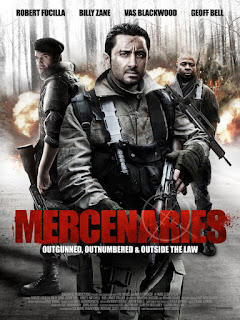 The film Mercenaries is the story of a non military group sent into a hostile Balkan territory to rescue an ambassador, his aid, and capture the war criminal responsible for the crimes against humanity. The military is not allowed to help the group, only monitor and retrieve them at the rendezvous point.

This movie starts off a bit slow. The group of four is soon diverted off course by there conscious while they witness a group of prisoners digging their own graves at gunpoint. A firefight ensues, and one of the group is gunned down.

The remaining remaining three reach the encampment about 30 minutes into the film and that is where the action heats up. There are copious amounts of bullets flying in this film from all angles making every conceivable sound. The director was thinking hey, like, I got a special deal on 10,000 rounds of ammo to make this movie, and I am gonna use all of them!

The scenery in the film was lush. The forest that the group was running through was full of tall thin trees, fall leaves, and green ferns. By shooting much of the film outside the crew was able to make good use of available lighting, and landscape.

Kirsty Mitchell as Beatrice she can shoot and she looks good. HAHA

The bad guys don't speak English, so they need subtitles. The dialogue in the film for the most part is very minor compared to the action. The acting is average, Billy Zane as Colonel Torida is decent, but certainly not one of his standout roles. Kirsty Mitchell as Beatrice the aide gives a good performance and pulls her weight by the end of the film, by killing a few bad guys.

To all of the negative comments, please keep them coming, as long as you are reading, joke's on you ROTFL!

Overall this is an decent film, not great, but worth a rent. I give Mercenaries a 5.5 out of 10
Posted by Dan's Movie Report-Danny Templegod at 12:03:00 AM