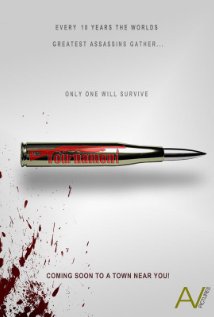 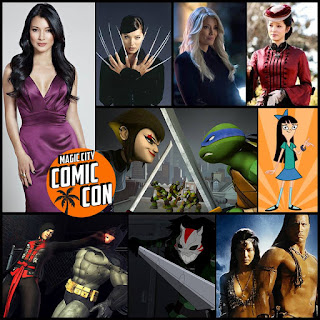 Initially my review posted on the Kungfucinema.com site but alas, that site is no more, so in the interest of my audience, enjoy! Keep reading Dan's Movie Report for more info, and exclusives! Kelly can also of course be seen on Arrow as China White, X Men as Deathstrike. and of course the action show Martial Law! THE TOURNAMENT is full of action, and crazy!


Languishing in development and production hell for what seems to be an eternity, Scott Mann's film THE TOURNAMENT finally gets a proper DVD release Oct 20th. The "combat death game" genre has been inundated with several films throughout the years such as BATTLE ROYAL, BLOODSPORT and THE ULTIMATE GAME. THE TOURNAMENT makes its mark by delivering a knockout punch with over the top action and enough plot twists to keep the viewer interested.

The story opens seven years ago with Ving Rhames character in a final bloodbath in a sordid meat packing company with two other assassins vying for the title of "World's Greatest Assassin". The scene is ultra sadistic, chaotic and bullets are flying like candy from an out of control mechanical Pez dispenser. As soon as Ving wins the battle, the environment rapidly shifts forward to the present day and the next tournament begins.

The present day battle, taking place in England, centers on 30 contestants all vying for a 10 million dollar prize and a chance to be hailed as the "World's Greatest Assassin". Each of the contestants is fitted with a two way tracking device which not only allows them to be seen by the game's ringleader, but also to be tracked by each other, on a blackberry type gadget. There are street cams, sat cams which are logged in with real time feeds to record the action for high stakes gamblers relaxing comfortably in front of jumbo screens surveying this game of death.

Each one of the devices contains a personal explosive as in the movie FORTRESS. The devises are heat sensitive and the tracking lights go out when either removed or the person expires. This is never fully explained, nor is it consistent. This fact is a major incongruity and contradiction, while also rather confusing. The relative ease as to which one of the contestants removes their device is bizarre. Probably the 10 million dollar prize would force people to want to stay in the game?


THE TOURNAMENT is a "story on the fly" auctioneer. The audience learns on the go about the characters, their faults, past history, and special skills while the action is occurring. There are several twists as the action unfolds and to divulge more about them would deter from the enjoyment of the fast paced, diversified story, which includes an unwilling participant who happens to be a priest. Revealing anything about him or why he is involved would deter from a plot complication which occurs quite early in the film.

Kelly Hu from "X-Men 2" and Martial Law plays a Chinese assassin named Lai Lai Zen with a strong set of hand to hand combat skills, combined with lightning fast reflexes. She has several interesting fights in the film. The filming style used when she is involved is like the Jason Bourne series, close up in your face action. The edits are sometimes a bit quick. This slightly deters from the action, but keeps the viewer engaged. The stunt martial duties are expertly performed by 3rd degree black belt Tea Kwon Do instructor, stuntwoman Kimberly Chiang. Ms Chiang recently completed a stint as fight coordinator on THE 100! For more information on her blast your browsers to my exclusive interview, which includes photo from THE TOURNAMENT! http://dansmoviereport.blogspot.com/2014/08/kimberly-chiang-interview-exclusive-c.html

Kelly Hu has astonishing onscreen presence in THE TOURNAMENT especially as her character is drugged to implant the chip. She has to go through a wide variety of emotions throughout the film and commands the screen with her intensity and fortitude. A lead part such as this might catapult her back into the action realm.

Ving Rhames plays Joshua Harlow the past winner of the contest and a grieving husband. The story unfolds revealing find out his wife was murdered by one of the contestants. Usually relegated to big scary guy in his films, Rhames plays the role with passion and perhaps delivers one of his most dominant performances in his career.

This movie is so unbelievably violent and the pace is astonishingly frantic almost in the style of SHOOT `EM UP. THE TOURNAMENT also contains a variety of elements to offend everyone. Not for the faint at heart, this movie includes nudity and violence in the same scene, as a strip club becomes a warzone. One of the characters, playing up his crazy cowboy mentality, kills people and dare I say an animal not even in the game just for fun. If these facts are bothersome by all means stay away, the audience has been warned.

The twelve million dollar budget was used to full effect with hand to hand combat, knife fights, gunfights, and a battle on a Double Decker bus! The action is nonstop for 90 straight minutes. Oddly there is a bizarre montage in the middle with the slowest music possible, bullets and bodies are flying. Perhaps this is some sort of an attempt of a dichotomous allegory or maybe simply budget or time constraints.
Watch also for talented and in this film crazy Rachel Grant as Lina Sofia! Rachel played 'Peaceful' in DIE ANOTHER DAY, but she is not so peaceful here! Win an autograph of Rachel on my site! Go to http://www.dansmoviereport.blogspot.com/2015/10/rachel-grant-die-another-day-james-bond.html

Even with the incongruities, distractions, rather bad box art, and plot holes this is an unyielding, forceful, and memorable action film. THE TOURNAMENT features several blink and you miss it sequences and is worth repeat watching and should have had a theatrical run. The recommendation is a strong rent even a buy, especially if you liked SHOOT `EM UP or BATTLE ROYAL.
Watch for more on Kelly Hu coming in 2016, on your home for exclusives Dan's Movie Report!
Posted by Dan's Movie Report-Danny Templegod at 7:54:00 AM