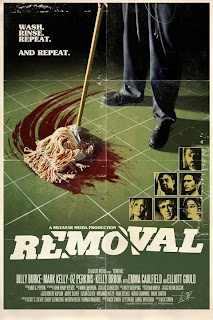 Above Pic: Removal Poster from IMDB


Psychological, dark comedy-horror from Lionsgate just in time for the holiday season! Removal tells the twisted tale of a cleaning service employee and a dirty, deranged job in a mansion.

The film opens with Eric Kershe (Billy Burke) losing his job and calling his buddy Cole Hindin (Mark Kelly) over to his house, then delves into the area of madness and insanity, with hallucinations and fragmented reality. Cole witnesses the murder suicide. Cole goes through rehab, then is out again working as a professional floor house cleaner

Nothing is what it seems in Removal, after a double shift, Cole is called to do a cleaning job in a mansion. He hears the shattered fragments of discussions from the owner Henry Sharpe (Oz Perkins) whom he thinks is a deranged man, as all the signs point to it.

I will not delve into the story any further, but I can say that this one has a solid payoff at the end, even if it drags in the middle. This film actually would have benefited from a 10 minute trimming, even though the tension is building, there are times when, it just needs to pick up the pace. The other problem I had with the film is that we never saw the periphery characters enough to care about them, in actions and dialogue.

The acting in Removal is excellent. All three of the male leads are careful in their portrayal of their characters, and deal with the difficult dialogue and emotions with ease. Even the two ladies in the film have minor roles, do a solid job, but unfortunately the script does not allow their characters much development. Elliott Gould has a very minor role as the lead character's Doctor.

The settings, background music, and camerawork in Removal appropriate, but nothing stands out creating a mood like the twists and turns of the plot. The mansion, where the majority of the film takes place is huge, and sparse as it is being packed up for a move, so the setting is eerie, but nothing special. The camera moves slowly throughout the film, the hallucinations show in a fuzzy, sideways way.

Overall, I give Removal a 6 out of 10, a definite watch, however, I believe once you see this tale, the 91 minute film does not have the repeat watch-ability factor. Removal is available from Amazon, shipping 1-3-12.