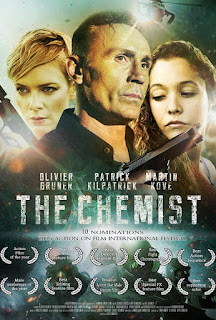 Above Photo: Poster of The Chemist with 10, nominations in the AOF Film Festival!

Assassin X AKA the Chemist will be released by Sony August 2nd! Follow the links to purchase!

Greetings fellow action movie watchers, Danny here from your #1 worldwide indie source of action, Dan's Movie Report. Fresh of the presses is Art Camacho's tail of action, seduction and treachery, 'The Chemist'! Haters be damned, Art has pulled out all of the stops and this film screens in 4k 5.1 surround sound live September 25th at the fantastic Action On Film Festival in Southern California, The Tickets are $10 and trust me, will be well worth it! 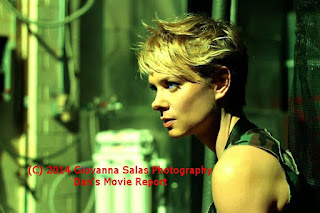 Because this is a very early, and preliminary review, there will be no spoilers, yeah not the way to go. The plot revolves around an assassin who refuses to kill a woman he just meets, and is double-crossed by his employer.

Interestingly enough, this marks the feature film action debut of both Nina Bergman, and Stephanie Gerard. Both actresses had to undergo intense physical training for the 102 minute film. Please check out their exclusive interviews on Dan's Movie Report @ http://dansmoviereport.blogspot.com/2014/09/actress-nina-bergman-interview.html

On the highlights of the 'The Chemist' is a balance and strong female character development. Most action films the action lady in there is rather one dementional, these ladies have the heart and determination to drive home the concepts put forth in 'The Chemist' 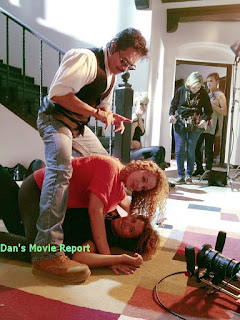 Art Camacho told e that this was nit an easy shoot, but the team worked hard in the previous months to get the film ready for the screening. Art is a solid individual, and very respectful, and manages to pull together a gritty, whirlwind action film. The character development in 'The Chemist` is on the fly
we learn the characters as the story unfolds. What makes this film work is that, the audience is fed tidbits, but never the whole picture.

Special mention goes to director of photographer Carmen Cabana, and her astute eye in framing backdrop in relation to the scene. A particular sequence in which a thug is dangled over the side of a building for information, rather than choosing a close shot, the scene is lensed at a dramatic angle, showing the wreckage below, the building, and the faces.

This film has some minor issues, a bit of pacing as the pace was a trifle relaxed, and perhaps needed to show a bit more urgency. The run tie of 102 minutes could have been tightened to perhaps 95. The acting was decent, the ladies, Nina and Stephanie, seemed to show the most emotion. but some of the smaller characters seemed like they might not have been fully focused on the scene. The fight scenes had some stop action and slow motion, perhaps due to the different fighting levels of the characters. Master Eric Lee has a small scene and he is tremendous. My main complaint is the lighting in the darker scenes. it seemed a bit off, hard to follow.

These are nit picky things, but overall this is a very good film.  Especially when stacked against some of the low budget films of Oliver G`s in the 90s. `The Chemist is seething, aggressive, angry and thanks too Nina and Steph, damn sexy.

Overall `The Chemist` rates a solid 7.5 out of 10, a must see. I am sure this production is a building block for years to come for people involved, and the next effort will only get better.