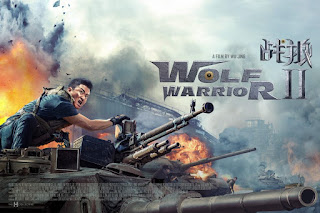 Fresh on the heals of the American film Atomic Blonde, Wolf Warrior unleashes hell on screens in the U.S. Although different kinds of films Wolf Warrior 2 develops a story and the audience cared about the characters. Celina Jade plays a doctor who is in the middle of a quarantine zone and her world is turned upside down when rebels (Isis style fighters without the black) come to over throw the government and create chaos.

The film was partly shot in Africa, and the location added the heart and soul of human suffering and poverty. Wu Jing befriends a young African child and vows later in the film to rescue his mom from a factory cut off from civilization by the rebels. Again, the development of secondary characters is really important for the enjoyment of the film and unfolding of the story. 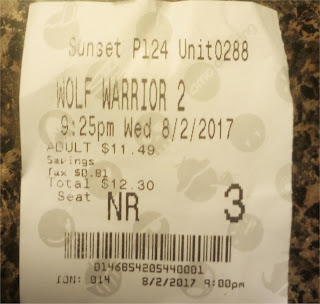 Above: My actual ticket for 'Wolf Warrior 2', was well worth the 80 mile round trip, as was showing only one county over!

The villains although not developed like out heroes were really relentless, my hot take was Heidi Moneymaker! Oh My god Heidi, usually relegated to stunts or one minor hit here or there has several kick ass action sequences including a fight with Wu Jing! Guilty pleasure, haha, Heidi is amazing her skill level is like 23 on a scale of 10 (Watch for our 3rd yes I have done two interviews already, but with the release of her book The Balanced Warrior, John Wick 2 and Wolf Warrior 2 holy hell it is time for a new chat! Two Interviews from Heidi one in 2016 and 2015. http://dansmoviereport.blogspot.com/2016/07/actress-heidi-moneymaker-interview-c.html


Celina Jade breathes life into her character, yeah it kills me she does not have any fight scenes but as Wu Jing says when Celina picks up a weapon “You are here to save lives not take them.” Celina is given a meaty role chalk full of heartfelt lines and emotions. After being first on earth to review 'April Flowers'. I can hope that more movie screens are graced with her lovely presence. She is so kind in person and I really enjoyed our lengthy first interview. Please check out the first interview: http://dansmoviereport.blogspot.com/2014/07/actress-celina-jade-interview-exclusive.html
Promo fpr Dan's Movie Report: https://www.youtube.com/watch?v=FqARRhjUAGU

The action was so over the top, I looked at the eyes of others in the theater and the were open like saucers when Wu Jing stopped a RPG with a freaking web of barbwire and no not Pamela Anderson!
Deft fights, clever stunts with tanks Wolf Warrior 2 had some supercharged action. Action Actress Sarah Chang did a couple of scenes of doubling for Celina Jade in a helicopter crash sequence it was really cool. I feel that Sam Hargrave really worked hard on the action and as good as some of the sequences that Atomic Blonde had, this was yep I will say it really better, way better. Now the two long fight scenes in Atomic Blonde were amazing but the rest of the film tepid. Wolf Warrior 2 was bonkers, just imagine more bullets than Rambo, and almost as many fights as kill bill, with a cool story. Watch for the amazing and talented Aaron Toney, as a villain and crafting the fights!

Yeah it was a tad long, at 2 hours with that much action it was like the audience as they were leaving looked drained. There was decided Chinese nationalism, but that goes with the political landscape. As usual when watching theatrical films I stay for the credit,s and must commend all involved and kudos go to Well Go USA for releasing this in the theater in the US! Hell the action was just too much for small screen. At the AMC the volume was turned up to probably turned up to 11 out of 10 like Spinal Tap minus the mini Stone Henge!

Wolf Warrior 2 is damn amazing, 30 lashes and a real ass kicking from Heidi if you do not see this in the theater. The film rates an 8 out of 10! Tanks, Tanks for the memory! Wolf Warrior 2 has perhaps the most epic tank sequence ever as they are shot up, blown up, blown sideways, and tipped over!

Finally, I Implore all action film fans to support theatrical and home video releases of Well Go USA! http://www.wellgousa.com/theatrical
http://www.wellgousa.com/home-entertainment
And follow like their Facebook Page for updated info @ https://www.facebook.com/WellGoUSA
The company is putting in major work to bring strong action and great storytelling from all over the earth to the USA!