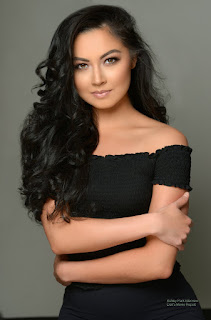 Greetings valued Dan's Movie Report readers. After interviewing Ashley a couple of years back, I was curious to see the direction her career has taken. After viewing Los Angeles Overnight, I had to catch up with Ashley again, and let her chat about her sexy and dangerous role as Abelie. Ashley is perhaps the nicest person in the film business, yet can mix it up as a bad girl, a sign of a real acting talent. Time for me to shut up and get inside the mind of Ashley. Please check out my review of Los Angeles Overnight: https://dansmoviereport.blogspot.com/2018/08/los-angeles-overnight-2018-movie-review.html

Chat about the audition process. Did you know the director prior?

I didn't know anyone involved in the project before I auditioned. Actually, I had another audition that day at the same location beforehand, and wasn't sure what the audition for Los Angeles Overnight would entail. When I signed in, I was handed a pretty epic monologue and wondered how I was going to pull that off in such a short amount of time! I sat down with it for a few minutes and read over it a couple of times, made some choices, and walked in. 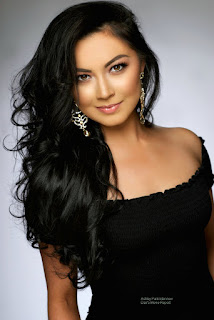 How long was pre-production? It looks like due to the fact there was copious dialogue for most of the characters, some time was taken.

We had a table read with most of the cast, and I recall coming in to rehearse as well as select wardrobe. The director, Michael Chrisoulakis, was a dream to work with throughout the entire process. If I remember correctly, they did do a very successful Kickstarter campaign, and before I knew it, I was on set with one of the most amazing groups I have worked with. Every member of the team had incredible energy, passion and talent.

How was the initial cast read-through? Also chat about how you learn your lines, both in general and for this film.

The initial cast read-through was terrific. It was a big group, but already a very supportive environment. I'm pretty sure I didn't know for certain yet that I was going to get the role of Abelie, so there is always some pressure there! I think I was offered the role shortly thereafter. I had such a blast bringing Abelie to life on the screen, so I'm grateful it worked out.

In general, I like to simply read and re-read the scene in the beginning without too much bias in order to take in every aspect of what I am reading on the page. It's so easy to start making your own assumptions without actually being aware of all the nuanced elements present in any given scene. I start creating who I am within this context, and from that point, I'll start memorizing while trying to always discover new trinkets for the character as I go. 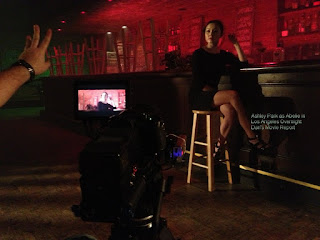 How about on the fly changes to the dialogue from script to filming, were you able to add any of your own ideas in there?

I am a very by the book kind of person when it comes to the script. I generally try to respect the writer and stay true to the lines unless there is a real reason to bring something up as a potential fix or change. I feel that my job is to do my very best with the lines I'm given, so I'm pretty sure that I stayed true throughout. I know I was asked to make some last minute changes to the script on set, which I'm always willing to do. I love getting direction and running with it.

Ashley, you are like the sweetest person I know! How did you get into character for this icy villain role?

I think we all have a darker side that each one of us is capable of tapping into. I mean, ride along with someone in LA traffic and you'll undoubtedly see it! I absolutely love the role of Abelie. And I actually really like portraying icy or villainous characters. I think because it's so different than how I am on a day-to-day basis, it's almost surprisingly too easy to go there and get lost in it just for fun. Abelie felt very natural to me. I think the director and writer once told me that they chose me because of how utterly terrifying the audition was. If that's true, I think that's simply the highest praise an actor could ask for. 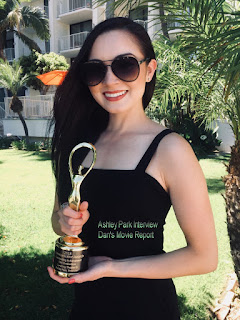 Do you scene study other actors who do great villain roles like Al Pacino and Kathy Bates to get into the mood?

I love Kathy Bates! She is incredible. I wouldn't say there is anyone specific I watch, but I do try to take in a wide variety of genres, both as a filmmaker and actress. I really believe in the power of knowledge. I am such an advocate for continuously and avidly learning from both books and life in order to grow in skill and wisdom.

Chat about the filming process. How many days were you on set filming?

The filming process for the entire movie was spread out quite a bit, but I believe I was on set for a total of 5 days or so, by the end of it. I loved having more time with the script, especially the epic monologue. It was a little indulgent compared to what I'm used to, so that was nice. Sometimes you get a script and you're on set filming multiple pages the very next day. 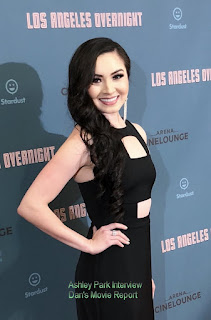 Did you have to go in for ADR? It seems like ADR was used a lot on the outside scenes to level the volume.

I did do ADR. I won't say where, but that is always a challenging yet necessary evil in filmmaking. You always pray that it will be for one small line somewhere and not an entire scene! It can be very difficult to match where you were at as the character the day of filming, especially when ADR is recorded a long time after the film has wrapped. It's never quite the same.

Chat about the first time you saw the film. Did you guys have a "cast and crew only" screening? If so, was anything changed prior to the premiere?

I was allowed to go to an early private screening for family and friends when the film was still in post, and yes, the film has changed tremendously since that day. The masterminds behind Los Angeles Overnight are brilliant filmmakers and knew just how to cut the film into the beautifully finished product it is today. As a producer myself, I know how challenging film making is, from conception to the finish line, and I am so proud to have been part of such a passionate, hard-working group that got the job done.

Chat about your thoughts on the film now that it is out, and the feedback you have been getting.

Michael and Guy, along with Camilla and the rest of the filmmakers behind Los Angeles Overnight, did a beautiful job that is worthy of the praise they have been receiving from multiple avenues. This feature is a unique take on film noir that does just what it is intended to do, and the feedback I've heard has reflected exactly that.

Finally, since we did our initial interview, chat about some of your long-term goals in the business. Have any of your philosophies changed since our 2015 chat?

I think the last time we spoke I had just won the title of Miss Asia USA, which was such a transformative period. I certainly hope some philosophies have changed, but only for the better. I will always be exactly who I am with what I know at any given time, and I do my very best with that. Every challenge inspires me to grow as a person, a businesswoman and a performer. My intention is to simply keep raising the bar, no matter the endeavor. I recently won the Communicator Award of Excellence in Film Production for a film that was self-produced (also a 2018 Tribeca Film Festival Official Selection). I recently received my MBA and started my own production company, Ashley Park Productions, where I am currently in pre-production for a commercial feature with an incredible multiple Emmy Award-winning team.

Thanks Ashley, once again, your intellect and observations allow my readers an inside look at Los Angeles Overnight. For further information, please check out Ashley's IMDB page @ https://www.imdb.com/name/nm3844430/?ref_=fn_al_nm_1
Follow Ashley's Instagram page: https://www.instagram.com/xoashleypark/?hl=en

For our first interview please point your browsers to: http://dansmoviereport.blogspot.com/2015/11/ashley-park-interview-c-2015-dans-movie.html