Above: War Poster from IMDB 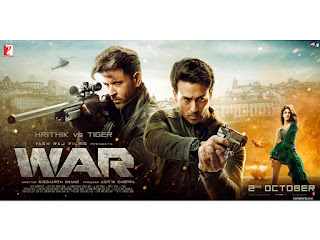 Greetings valued Dan's Movie Report and www.action-flix.com readers. As you know I enjoy films from all over the world and I knew thanks to my friend and action supporter Ron Smoorenburg he told me about this amazing Bollywood Epic! War is only playing at about 300 theaters in the United States, I know it will hit Amazon Prime in a few months but this is a theater film all the way. A word of caution, the film is also showing at those D-Box screens, initially I payed the extra for the seat until I tested out a sample, it basically is a ride and the seat moves around, I cannot justify the double price, nor siting being jostled badly for 3 hours!

War is an amalgamation of a variety of diverse styles. It had elements of Bollywood, but actually this is more like a Hollywood action film. Shot all over the world including Australia, Portugal, Finland, the film reminded me of a James Bond flick, yet had the science fiction aspect and military aspect. Film wise, a mixture of Face-Off, GoldenEye, and Fast and Furious! Yep it is that crazy! The 2 hour and 34 minute flick has only two dance numbers! Yep, and one comes in after a huge action sequence and has some really cool moves in it. The second one is after intermission, and it is slower, yet has many sexy girls minus Saris, all western clothing! I will have to say WAR is made for a global, not just Indian audience.

What you have are two main characters the experienced soldier played adeptly and gritty by Hrithik Roshan (Kabir) he has to deal and accept a new recruit whose father was a traitor and turned in by his mother. Amazing young talent Tiger Shroff plays the upstart (Kalid) wanting to get out from under his fathers traitor ways.

The cool thing about War is the audience is allowed to go back in time to tell what leads up to the events that happen in the beginning and learn so much about the two main protagonists and or antagonists ha! The twists and turns of WAR are as dynamic as the action! We see the very young Kalid at school being bullied as his father is a traitor. His mom comes on the scene and meets him at the military base, a heartwarming scene yet a cautionary tale.

Nothing is what it seems in WAR. Trust me, with each exotic location, you never know where or where a team of bad or good guys will come from. The true highlights are the extended scenes, I mean the action sequences are long and well planned out. From the opening drug den bad guy take down to the epic and I mean EPIC car chase that leads into a massive fight. Some sequences are like double or triple the length of Hollywood films!

The supporting cast on WAR is extensive, yet this adds to the scope of the film. Plus by assembling an international cast of action and stunt performers each one adds their own flair to WAR. Brahim Chab is involved as well as Ron Smoorenburg and what is really cool is basically in each location they have stunt coordinator for that location. The adept Kristina Basket a SAG USA stunt performer is also in the fray.

Getting back to the dialogue, dancing and story of WAR, there is a decent amount of dialogue, but when the action ramps up the dialogue ramps down. No overly loquacious diatribes in WAR. People speak clearly even if I do not understand the language, the vocal mix is strong. The two dance numbers I mentioned earlier are actually very good, I hope that Bollywood adapt this two to three max numbers of dance numbers in their action properties. That was my issue with Sultan as amazing s it was damn frustrating to have the worse timing and so many dance interludes. The story is at times hard to follow, as the timeline shifts back a couple of years then back six months, there is a warning but unless you see the very beginning of the film, where you see the person getting shot, you wont know who or what they are talking about, same goes with the middle right before the intermission, no I am not going to spoil it. The final 1 hour, is just balls to the wall action as the second musical number is right after intermission. Think ICBM, ice breaker, transport plane, a secret intelligence code breaking and hard drive expert hacking woman, who on the day prior to her wedding she does the work and then haha offers to elope without her husband!I do wish some of the ladies got into the action instead of just the tech and the dancing, that said this is a guys movie, doing guy war things!

Yes this moving picture is all about the moving, in the context of the action, and metallic suction magnets to grip onto a speeding plane. Can any of this happen, or is it a fantasy? Well agents do go rogue and military men often sadly shoot other military men, this is a real possibility. The other thing is no way would he survive the landing from one plane to another hah, but check in and check your brain at the door, leave your action cortex in the lobby and get to a theater. I saw it will be on Amazon prime in 4k soon as well so if you have to wait, make sure to stream it in the highest resolution, with the loudest speakers, on your 105 inch TV! Enough of my crazy ramblings haha this ends now with WAR a damn near perfect 9 out of 10! The film has already broken box office records in India, check the trailer below: https://www.youtube.com/watch?v=tQ0mzXRk-oM