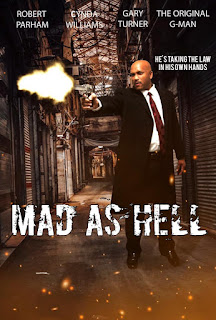 Above Photo: Poster for Mad as Hell (C) 2020 Meyham Films, all rights reserved. Second Photo, Cynda Williams as Detective Briggs. All photos are promotional use only, not monetized.


Greetings Action-Flix and Dan's Movie Report readers. Danny Templegod here, I have some exclusive photos and a video from the brand new film 'Mad As Hell' which is in production now from Meyham Films. The production stars Cynda Williams as Detective Briggs, Robert Parham as Michael Azreal, A'Ali de Sousa as Captain Fury, and D. Brad St. Cyr as Detective John Carrs.

The Action/Crime drama will be released in the summer of 2021 on Maverick Entertainment. Director Robert Parham told me that the production is commencing under strict Covid compliant protocols.

Robert Parham has informed me that on 'Mad As Hell' there will be a brand new Dr Dre tune released for the sound track! More news to follow.

In 'Mad as Hell' Robert Parham plays an insurance salesman, who by complete accident is accused of the murder and has to clear his name by assisting detective Briggs help find the real killers. I have read the script and it includes many twists and turns, so no spoilers! The film will be out in the Summer of 2021. More news to follow!

Robert Parham's films have an indie urban flair, great sound tracks, with entertaining dialogue, and gritty action. Bottom line is Meyham Films is hard working and their movies get produced and distributed, even during these trying times!

Cynda has a long career including starring in Spike Lee's Mo' Better Blues with Denzel Washington and Wesley Snipes!

Check out the shout out for Dan's Movie Report from Robert Parham, and Cynda Williams live on the set of 'Mad as Hell'!!

Keep it locked on Action-Flix.com and Dan's Movie report for all the exclusives from MEYHAM Films!