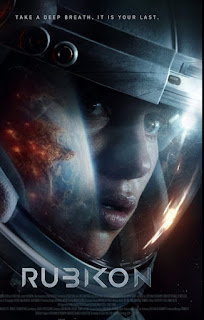 Above Image (C) 2022 IFC= All rights reserved, image used for promotional purposes only, not monetized

Anyone who knows me realizes how much I enjoy watching two genres of films besides action, Science Fiction and Horror. Well, seems like the new film on now available from IFC on as a pay extra on Amazon Prime, among other streaming outlets, makes an attempt at delivering, sadly though, 'Rubikon', tries to be intelligent, but kind of ends up as a boring, rather drab discussion on a sad future where the world is run by corporations and many millions have apparently died by some unknown fog.

Director Magdalena Lauritsch who is also one of the films writers, tries to cram elements of story into 'Rubikon', my issue is there is just not many plot developments, and when they happen, the audience is thrust right back into the mundane story. The entire film is basically three people stuck on a space station. Eventually they try to make it back to Earth. The attempt is unsuccessful, to be honest, I would have liked to see them actually make it back to Earth to view the consequences of Human action. The science behind the toxic fog, and this weird living algae mass, that is sustaining them on the space station is never fully explained. I am assuming it has contaminated the world as it is stated that rich people live in a dome that allows for consistent fresh air and food, again not entirely explained.

I actually had to finish the movie over a few sittings, actually the acting is rather good, yet, just not enough going on to warrant a recommendation. Actress Julia Franz Richter worked very hard on the physical and emotional aspects of her character, and she had a lot of dialogue and actions. The other two leads Mark Ivanir as Dimitri and George Blagden as Gavin essentially make up the entire main cast, and the interplay between the three leads to various situations and confrontations. I really wanted to like this film, the premise is quite interesting, I just do not think the film makers had the proper budget nor script consultant to allow for a more entertaining film. I will have to say 'Rubikon' is a pass from me, and rates a tepid 4 out of 10