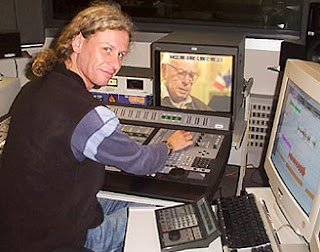 David Blyth in the studio. Image taken from his official website.

Dan's Movie Report is proud to present an exclusive interview inside the mind of New Zealand's legendary horror director David Blyth. Mr Blyth is currently screening his soul-shattering, mind-binding film "Wound" worldwide, and took time out of his busy schedule to talk in detail about his thoughts on the production and some of his influences. For further background on all of David's projects past projects, please visit his official site http://davidblyth.com/ Currently the film is available worldwide for purchase directly from David, through his official website! Support the underground!


How long did the filming and post production on "Wound" take?

Wound was shot over 12 days in January 2010. Post production was from February to May. We got acceptance into Fantasia Fest Montreal and Fright Fest London in May 2010.

What was the approximate budget of "Wound"?

If you had 10 times the budget what would you change about the movie?

Nothing, other than paying the actors and key crew the money they deserved.

Did you have the two lead actresses in mind after you wrote the story, or were there several auditions?  Describe a bit about the audition process.

I did not have anybody in mind when I wrote the early drafts of Wound. Along with Producer Andrew Beattie we held auditions for the two female leads. The Tanya character was cast first, Te Kaea Beri. Te Kaea was already known to me through South Seas Film School, where I had been a part time tutor. The role of Susan was much harder to cast and after several hiccups, Te Kaea suggested I meet with Kate O’Rourke. We met and I instantly recognized that Kate had the power and focus to bring this troubled character alive.

76 minutes is a bit short for a film including closing credits, did you shoot a longer cut or did it just feel organic make the film this length initially?


I’m happy with the length of the film. There was no longer cut of the film. Only a few brief scenes were cut to strengthen the films focus. For me the film is like a fever dream, pictorial with many layers of mystery and meaning. I personally get physically uncomfortable watching three hour plus films. It can be uncomfortable like long haul air travel.

Cutting to the chase, is it your intention to convey that the entire movie except the very beginning and end is played out in her subconscious mind?

It is my intention to convey a series of shards from Susan’s mind, which ones you relegate to reality or unconscious projection is up to the viewers own life experience.


What was the significance of Susan being forced to drink coffee? Even after a second viewing I was not able to fully grasp the concept.

The Master forcing Susan to drink many cups of coffee, is to test her obedience in a physical way by denying her permission to go to the toilet to relieve herself. Ever been stuck in a traffic jam and needed to go. You will know the pain.

Did you intend the S&M club scene where she was bound by saran wrap represent the bonds inside her mind allegorically?

Yes the S and M scenes are allegory, but they also represent a mental dimension where both Susan and Tanya can connect with Ruth. Susan’s dead Mother.

Do you feel that the line between Susan's reality and her unconscious mind is blurred throughout the whole movie or just in certain scenes?

I like to think that the personal interpretation of the viewer, of what is real and what is unconscious is all that matters. This film does not follow the “Hollywood convention”, and does not provide a happy ending, but takes you on a unique mad journey into the unconscious where mystery and transformation await.

Did you intend to show Susan trying to function as a normal person at the end with her sales call job, or was that merely the last straw in her life and she was sick anyway?

Even when you are mentally unwell, you still have to pay your bills and make a living. Susan working in telephone sales is her attempt to stay connected to the real world. Telemarketing is also my worst fear if I ended up having to change jobs!

What are your favorite scenes in "Wound"?

My favorite scene is the fathers grave burial scene outside in the garden. Where Susan unloads the packages from the recycle bin. I call it the “meat and potatoes” scene. Jed Town’s haunting trumpet here highlights the brilliant sound design in Wound. ( Jed Town was the composer and played most of the instruments in the film except for the Harp.)

Was it your intention to make "Wound" delve into an air of ambiguity to allow for individual interpretation?

Yes I wanted to explore the unconscious and how a woman can be haunted by events in her past that may or may not be real. Also do we really have free will? Or are we hard wired and can generational disconnects be passed down through the family generation after generation?

Have you ever screened "Wound" and had people walk out of the theater, while you were present or ever heard of it second hand?

Yes I have been present at screenings of Wound where there have been walkouts, including within ten minutes of the film starting due to the castration scene.
All my horror films have provoked mixed reactions over the years and certainly walk outs have occurred with every one of them. This is not as disheartening as a Distributor fast forwarding through your film in front of you.

What are some of your favorite films? Directors?

What is your next project?

I am working on a new script as yet untitled. It will continue my interest in sexual fables involving demonic possession and an imploding family.


This film is amazing and is currently my favorite film in 2011. Hopefully it will land on US shores soon.