Angela Meryl has informed me that she has been cast in the upcoming comedy-horror, indie flick called "Hott Damned" Here is a pic of her as the character of Crying Mother 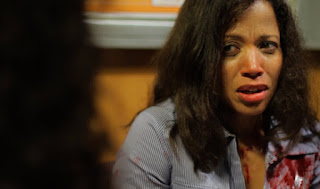 t is the of story of a hard knocks, orphan girl who is cursed to spend her life hunting and killing supernatural creatures in order to regain her humanity, all the while fighting the growing darkness within herself.

After taking her revenge on a rapist Priest, MELISSA (Heidi Lewandowski), tries to commit suicide, fails and by so doing is cursed, unable to reach heaven or hell. She quickly discovers that the curse includes the ability to see the dead and feel their emotions. With no heartbeat, Melissa is something of a mystery to the medical and religious worlds; everyone from doctors to priests are trying to figure out why she is still walking and talking when she should be deceased. Only one man, a priest named FATHER THOMAS (Bob Bancroft), seems to be the only person who knows why Melissa can't die.

Fast forward fifteen years later: Melissa is now joined by her ghostly smart mouthed sidekick MONIQUE (Erika S Ellis), an angel without wings. They are mercenaries, hunting and killing zombies, ghosts, and other supernatural creatures to pay the rent.

The movie is written and directed by Ryan "Isreal" Porter and the website is:

http://www.redkitepictures.com/hott_damned/story.htm There are links to the FB and twitter pages on that site as well.