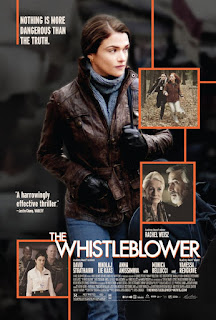 There have been several movies that have dealt with the difficult human trafficking subject matter, this is the first one I have seen that is based on actual events and a real person. "The Whistleblower" tells the story of Kathryn Bolkovac a police officer who is assigned as a peace keeper to oversee a smooth transition in a war torn area of Bosnia in 1999.

The movie is bleak depressing and often times a bit preachy, but the performance of Rachel Weisz as Kathryn takes an average film and hoists it to oscar heights. She is an emotional roller-coaster of pain and anguish from the outset. After trying her hand at gathering evidence for a wide variety of cases, she eventually settles on the plight of young girls who are bought and sold as sex slaves by the very people who are supposed to protect them.

Her main case, the one girl she seems to care about the most named Raya, is so afraid of her tormentors she doesn't even want help. Raya is played with soul by newcomer Roxana Condurache.

Torture is shown, more often than not implied, but it is relevant to the story. Vanessa Redgrave and Monica Bellucci have small supporting roles, but I particularly did like Monica's cold hearted portrayal of bitchy bureaucrat Laura Leviani. She follows orders from above but never listens to the story behind the story even proudly tells Rachel Weisz that she turned the missing girls over to the I.P.T.F. (International Police Task Force) the people responsible for the trafficking in the first place, honestly the first time in any movie Monica has been in you just want to smack her! 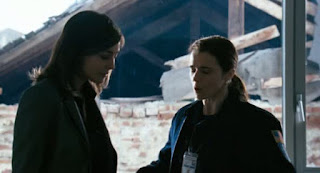 This is not a feel good movie, and at the end there are text crawls pointing out the fact that even today 2.5 million people are involved as sex slaves worldwide, an eyeopening fact.
This is an important film, but could have even been better with a tighter story, even though it was based on true events. I rate this film a rent, because this is not a movie to watch over again, not that it is bad, just too damn depressing. My rating: 7 Out of 10
Posted by Dan's Movie Report-Danny Templegod at 9:34:00 PM