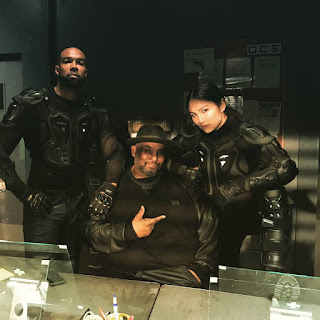 Above: Director Ben Ramsey in the center of the action! Get ready! Photo from Ben's Facebook Page!

Update: August 9th 2018: Producer Daniel Zirilli (Please check out our Interview- http://dansmoviereport.blogspot.com/2016/04/director-daniel-zirilli-interview-dans.html )joins Interface to push the project to the next level:  Daniel Zirilli "When you see the insane action co-creators Ben Ramsey and Arnold Chon and team created and the whole cinematic universe we are expanding for INTERFACE and the various media involved- it will blow your mind. The action sequences alone surpass anything I’ve been involved in to date. I’m so happy to be a producer on a project like this- though will take a while to fulfill its destiny - I am down for coming together with these creative geniuses. Mark my words. You will see!"

Greetings valued Dan's Movie Report readers, awhile back director Ben Ramsey, who directed the amazing short film Black Salt and the full force action feature Blood and Bone released a comic book called Interface. The book details a horrific, yet beautiful near future nightmare where the world is jacked into consciousness and crimes, criminals and law enforcement have undulating, yet blurred lines of existence..

After completing principle photography on the initial sonic blast of the first episode, Ben Ramsey, and the intrepid main cast of seasoned professional action people such as Emmy winner Master James Lew as stunt coordianator Chris Jai Alex , Michelle Lee , Kinyumba Mutakabbir (Both Michelle and Kinyumba starred in 'Black Salt'. The amazing Arnold Chon is one of the films producers. The short i ready to be unleashed to the world! Watch for more information soon on your home for exclusives, Dan's Movie Report.

The appx.
running time for Interface is 30 minutes, watch for a new trailer soon, incidentally, of course, this film is shot in 4K! Hard action in UHD!!!